All Hail, the Scottish Workers Republic ! by John Maclean 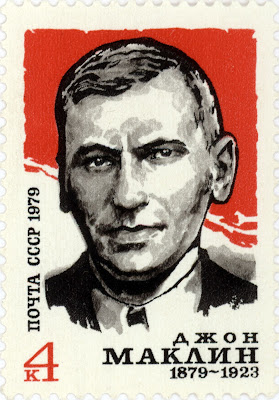 First issued as All Hail, the Scottish Communist Republic in Aug 1920, and subsequently reissued along with Nov 1922 election address.

For some time past the feeling has been growing that Scotland should strike out for national independence, as well as Ireland and other lands.

This has recently been strengthened by the English Government’s intention to rely mainly on Scottish troops to murder the Irish race.

Genuine Scotsmen recently asked themselves the question: “Are we Scots to be used as the bloody tools of the English against our brother Celts of Erin?”

And naturally the instinctive response was - No!

Again the land seizures by Highland crofters are arousing the blood of Highlandmen driven south to the Clyde Valley for work. Especially the filthy tactics of Lord Leverhume (an English capitalist), who has dismissed Stornoway wage slaves as a means of beating the Lewis raiders who seized the farms of Coll and Gress.

Scottish students of history now realise that Edinburgh lawyers and politicians sold Scottish independence in 1707, although most blame has fallen on the Earl of Stair. many of us are convinced that ever since 1707 the Edinburgh kings’ and queens’ consels and politicians have been in the regular pay of London to keep Scotland as the base tool of the English government.

These scoundrels in the eighteenth century helped to ruin Burns, the peasants’ and people’s poet.

The “rebellion” of 1715 and 1745 were natural reactions against the treachorous deed of 1707, but these unfortunate outbursts but gave the English the excuse and chance to subdue the Highland chiefs and then corrupt them with an English education at Oxford and Cambridge.

Since 1790 the chiefs became Englishmen in outlook, and used their clansmen to defend English capatalism against the revolution started in Paris in 1789.

Since the Napoleonic wars the Highland regiments have been used to defend the stolen lands of England all over the globe, and have largely helped to extend the English empire.

Whilst doing this, the Dukes of Sutherland and Argyll and other chiefs proceeded with the english landlord policy of land clearances. The friends of the fighters were chased of their native heath into the lowlands or out to Canada and Australia.

Now the reaction is beginning - inspired by Ireland and Russia. Scotland must again have independednce, but not to be ruled over by traitor cheifs and politicians.

Scotland must therefore work itself into a communism embracing the whole country as a unit. The country must have but one clan, as it were - a united people working in co-operation and co-operatively, using the wealth that is created.

We can safely say, then: back to communism and forward to communism. The control must be in the hands of the workers only, male and female alike, each workshop and industry sending delegates to district councils and the National Council.

The National Council must be based in or near Glasgow, as half the population lives within a radius of twenty miles from Glasgow.

In the period of transition a wage-earners dictatorship must guide production, and the adoption of the machinery and methods of production, to communist methods.

Many Irishmen live in Scotland, and, as they are Celts like the Scots, and are out for Irish independence, and as wage-earners have been champion fighters for working class rights, we expect them to ally themselves with us, and help us to attain our Scottish Communist Republic, as long as they live in Scotland.

Irishmen must remember that communism prevailed amongst the Irish clans as amongst the Scottish clans, so that, in lining up with Scotsmen they are but carrying forward the traditions and instincts of the Celtic race.

All hail the Scottish Workers’ Republic!

Democracy and Class Struggle says an historic opportunity has arrived for Scottish comrades to fight for the revolutionary communist ideas of John Maclean, comrades must not be used as shock troops for the Scottish National Party but must ruthlessly expose fake bourgeois nationalism of the SNP has Maclean would  have done, has true  independence can only mean