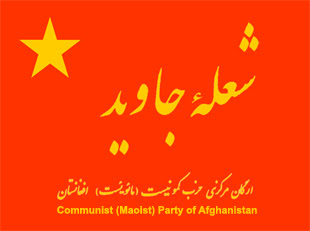 PCm Italy expresses red salutation to the Communist(Maoist) Party of Afghanistan on the death of comrade Hafiz
His history is a true example of communist and internationalist in communist movement in Afghanistan and in the world.

Honour and Glory to Comrade Hafiz


To the Communist (maoist) Party of Aghanistan,

It is with deep sadness that we learnt the death of Comrade Hafiz. Because we are proletarian internationalists, we consider every loss for the maoist movement of a particular country as our own loss. Especially with your party as we signed the joint 2012 May 1st Declaration.

As a revolutionary leade, Comrade Hafiz will inspire a new generation and the revolutionary seeds he sowed during his entire life will undoubtely blossom.

Our condoleances go to the entire Communist (maoist) Party of Aghanistan, to its sympathizers, to his familiy, relatives and friends.


To the Central Committee of the Communist (Maoist) Party of Afghanistan:
Dear comrades,
It is with sadness and deep emotion that we learned of the death of Comrade Hafiz, a Central Committee member of your Party and a dedicated activist and veteran of the communist movement of Afghanistan and the international communist movement.
The death of a comrade is always a loss for our movement, and it is even more when it occurs in a context like the one we face today in Afghanistan, where resistance to imperialist occupation is unfolding and requires a solid ideological, political and organizational leadership that puts the interests of the proletariat and the masses above anything else.
Everywhere in the world, the proletariat and the oppressed peoples are resisting the crisis of capitalism and the wars of aggression waged by the big imperialist powers. The aspiration to revolution and to a world free from any kind of oppression and exploitation has perhaps never been as extended as it is now.
On May 1st 2012, together with the Communist Party of India (Marxist-Leninist) (Naxalbari) and the Maoist Communist Party – Italy, your Party issued an important call to build a new Marxist-Leninist-Maoist international organization. There is no doubt that the rich experience of Comrade Hafiz with the Revolutionary Internationalist Movement (RIM) will inspire and serve the formation of such an organization that our movement urgently needs.
There is no better way to pay tribute to Comrade Hafiz than to work for consolidating the Marxist-Leninist-Maoist parties where they exist, for building such parties in every country of the world, for unfolding the world proletarian revolution and building the international organization we need for leading it.
Please convey our deepest condolences to all relatives and friends of Comrade Hafiz, to his comrades, members and supporters of your Party.
Revolutionary Communist Party (PCR-RCP Canada)
October 8, 2012

A special meeting of the central committee of the Communist (Maoist) Party of Afghanistan was held on 14 September, 2012 to pay tribute to the passing away of Comrade Hafiz and issue the following Communiqué.

He started his political and revolutionary activities in the ranks of the Sholajawid movement in the 1960s while he was a high school student. He remained committed to the line and objectives of the movement even after the movement’s collapse.

When the Peoples Democratic Party of Afghanistan (PDPA) led the reprehensible April coup in 1978, and the subsequent Soviet social-imperialist invasion and occupation happened in December 1979, comrade Hafiz continued his revolutionary and national-democratic activities in exile.

In 1984, under the influence of the formation of Revolutionary Internationalist Movement (RIM) and its political and ideological line, comrade Hafiz, along with several other comrades, formed the Committee for MLM Propaganda and Agitation that published the journal Shola. This journal played a significant role in the propagation of the Marxism-Leninism-Maoism. In the late 1980s, when the Committee for the Consolidation and Unity of the Communist Movement of Afghanistan was formed by joint efforts of the Communist Revolutionary Cell of Afghanistan and the Committee for MLM Propaganda and Agitation, comrade Hafiz participated as the representative of the group under his leadership.

While leading an émigré unit of party supporters, our comrade significantly contributed to the party and the revolution. Over many years he played a crucial role in carrying forward the international activities of the Communist (Maoist) Party of Afghanistan, both in relation to the activities of RIM and also as a contact of our party with particular Maoist parties at the international level.

Comrade Hafiz was actively involved in the ideological and political propaganda for RIM; he had an active role in the publication of A World to Win, RIM’s journal and also RIM’s internal publications into Farsi-Dari. The central committee of the Communist (Maoist) Party of Afghanistan expresses its solemn condolences over the immense loss of this veteran comrade to members and supporters of the party, other Maoists of Afghanistan and the world.

In particular we pay our tribute to the family of this comrade and express our commonality of deep sadness with them. All the party units within the country and party supporters outside of the country, in accordance with their particular local and regional circumstances, are obliged to honor and commemorate this comrade’s death and celebrate his life achievements as a revolutionary within this month. Messages of commemoration within the country can be sent through party contacts and channels; condolences from outside of the country can be sent through party supporters or electronically through email to sholajawid2@hotmail.com.
Posted by nickglais on 10/09/2012 10:51:00 AM