Although many British newspapers have quite rightly given extensive coverage to the financial crisis in Spain (Spanish bailout deal emerges, 9 June), there appears to be an almost total blackout of news about the response of the workers' movement in Spain to the austerity measures being pursued by the government. Most significantly, any reader of the British press could be excused for being unaware of the indefinite strike by Spanish coalminers that began on 31 May and is already escalating to the point of near civil war in some areas of Asturias and León.

The announcement by the conservative government of Mariano Rajoy of drastic cuts in subsidies to the mining industry, which will threaten the livelihoods of around 8,000 miners and endanger another 30,000 jobs, is being met by miners and their communities with a determined and united resistance. The response of the government is classically neoliberal and has no doubt brought tears of joy to Christine Lagarde and the other free-market warriors of the IMF. For those of us in the UK who remember the miners' strike of 1984-85, it is also depressingly predictable, with the Guardia Civil out on the streets in force firing teargas and rubber bullets at miners and their supporters.

British miners and those who supported the NUM owe an enormous debt of gratitude to the Spanish trade unions and particularly the miners for their solidarity and financial support during 1984-85. It is now time to stand with them.

Spanish state miners are on strike indefinitely against the brutal measures of right-wing government of Mariano Rajoy.The miners' strike has overlapped with an indefinite strike by transportation workers in Asturias and neighbouring Leon against wage cuts and proposed changes to work agreements.

Spainish media coverage of the conflict is also little or no more than local media with their limited means to disseminate news the minute it happens.

Location of Asturias within Spain 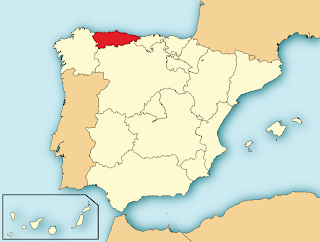