Llywelyn ap Gruffydd Fychan of Cayo - A lesson for Today he preferred death to treachery - No Jubilee Celebrations Here ! 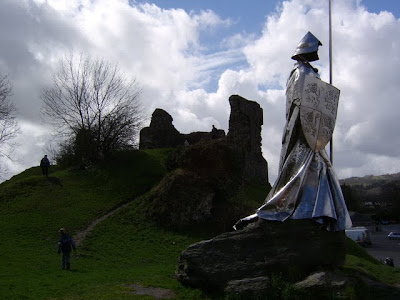 On September 16th 1400 Owain Glyndwr began a struggle to gain Welsh independence that was to last for 16 years. He roundly defeated Henry IV's army at Hyddgen on the slopes of Pumlumon in the summer of 1401 and then marched victoriously into southern Wales. In response Henry led a huge army from Worcester to capture Owain and crush the rising in its early stages. He arrived in the Llandovery area and press-ganged Llywelyn ap Gruffydd Fychan, a landowner from Caeo who was in his mid 60s, into his service to help him find Glyndwr's base.
Llywelyn was known as a host of great generosity and was well loved by his people. He had two sons serving in Owain's army and determined never to betray his country, family or Prince. He led the English king through the uplands of Deheubarth for several wasted weeks on a wild goose chase to allow Owain the chance to make his escape to Gwynedd where he could consolidate a position of strength.
Henry eventually lost his patience and Llywelyn was forced to admit that he was a loyal follower of Glyndwr and believed passionately in the cause of Welsh freedom. From the outset he knew what fate lay in store for him but was prepared to make the ultimate sacrifice so that others could carry on the struggle.
Maddened with anger and frustration, Henry had Llywelyn dragged to Llandovery where, at the gallows in front of the castle gates, he was publicly disembowelled and dismembered. The torture lasted for hours before death released him from his agony. His salted remains were sent to other Welsh towns for exhibition in order to deter patriots from joining Owain's army, but ironically this barbaric act did quite the opposite.
In the face of impossible military odds, Glyndwr's war of liberation eventually faltered. England possessed one of the largest and most ruthless armies in medieval Europe, as the French found to their cost a few years later in 1415 at Agincourt. But Owain was never captured or betrayed and had united the whole nation behind his cause. Of Llywelyn, who tenaciously refused to betray his people or accept the bribes and privileges dispensed by a tyrant, we can truly say, "there was no braver heart".
Robert ap Steffan

Democracy and Class Struggle says Welsh defeats in history down to the present have been due to treachery and betrayal but Llywelyn ap Gruffydd of Cayo is an honorable exception - a man who preferred death rather than treachery. His spirit will inspire the renewal of the struggle for national and social liberation in Wales.