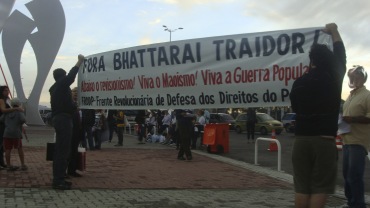 Bhattarai, revisionist and traitor, get out!

Down with revisionism! Long live Maoism!


Protest at Rio+20 The Revolutionary Front for the Defense of the People – FRDDP (Brazil), repudiates the presence in our country of the revisionist traitor Baburam Bhattarai, current Prime Minister of Nepal, at the UN conference “Rio +20,” held in the city of Rio de Janeiro between 20 and 22 June 2012.

Bhattarai in collusion with Puspa Kamal Dahal (Prachanda), betrayed the aspirations of the Nepalese people for a new society to put an end to centuries of exploitation and oppression of feudalism, bureaucratic capitalism and imperialism.

The Nepalese people, who had been cruelly oppressed for centuries by feudalism and imperialism, took the path of armed struggle under the direction of revolutionary Communist Party of Nepal (Maoist), in a heroic People’s War in 1996.

For ten years the people’s war developed greatly, building a new power of workers and peasants, delivering and dividing land to the peasants in large parts of the country, representing a living hope for all the Nepalese people and the people of the world.

However, after these great advances, faced with the pressures of imperialism and reaction, the direction of the CPN(Maoist), headed by Prachanda and Bhattarai, betrayed the revolution and completely capitulated to imperialism and the bourgeoisie, and in 2006, made infamous peace agreements, under the baton of the UN to disarm the people and its glorious People’s Liberation Army, ending the glorious revolution initiated in 1996. Prachanda and Bhattarai abandoned Marxism-Leninism-Maoism and joined revisionism, converted the Maoist revolutionary party into a reformist and revisionist “Unified Communist Party of Nepal-CPN (Maoist).”

These reformist leaders of the UCPM(M) betrayed the desire of the Nepalese people for a new society, exchanging, through agreements with imperialism, the struggle for a popular new democratic republic, into one more big government under the bourgeoisie and imperialism–exploitative and oppressive against the people–this time led by Bhattarai as prime minister.

Bhattarai, Prachanda, now equivalent to Hugo Chavez in Venezuela, Evo Morales in Bolivia, Rafael Correa in Ecuador, Fernando Lugo in Paraguay, Dilma and Lula in Brazil–real undercover agents of imperialism, that under the mask of “left” and “popular,” cheat and deceive the masses, in attempt to divert them from the revolutionary path, while committing the worst crimes against the proletariat and the people.

Protest at Rio+20 We reject the imperial conclave of Rio +20 in our country, where imperialist power agreements are made to prey upon and plunder the people of the world under the slogan of “sustainable development”.

We condemn with class hatred imperialism and all reaction, which is inseparable from the revisionism and opportunism of the lackeys to imperialism played by Bhattarai, Chavez, Evo, etc. Dilma.

We proclaim: long live the revolutionary struggle of the people, the current struggles of heroic national liberation wars in the world, Maoists led by communist parties in India, Turkey, Peru, Philippines. We reaffirm before the proletariat of our country and the world: the People’s War, directed by Maoist Communist Parties, is the way for the emancipation of the peoples of the world fighting imperialism and revisionism.

Down with all revisionism and opportunism! Down with Baburam Bhattarai, revisionist and traitor! Long live the people’s wars in India, Turkey, Philippines, Peru!

whoa, calling Chavez "lackey of imperialism" is disgusting and sectarian. He's doing a lot for venezuelan people when this group is a small, idealistic and bourgeois group confined in an university.