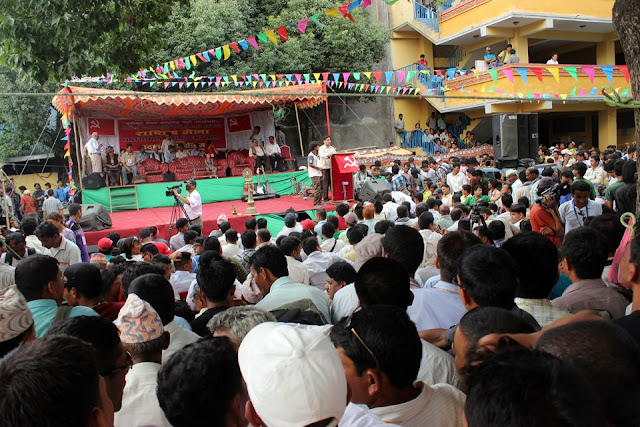 A national convention of the revolutionary faction of the Unified Communist Party of Nepal (Maoist) successfully held on June 16-18, 2012 concluded amid inaugural session, closed session and concluding session in the premises of Sherpa Sewa Samaj building in Bouddha, Kathmandu. The programmes run in the historic national convention in which several important decisions have been taken are as follows.

2.Conducted by comrade C. P. Gajurel, secretary of the UCPN (Maoist), a grand inaugural session, in which there was a huge participation of the masses along with party general secretary comrade Badal, standing committee members comrade Dev Gurung and comrade Netra Bikram Chand, politburo members, central committee members and members of the central advisory committee, was held under the chair of vice chairman comrade Kiran.

3.The inaugural session began with lively and enthusiastic singing of the International by Samana cultural troupe.

4.A one-minute silence was observed to pay emotional tributes to martyrs, who attained martyrdom in the glorious People’s War and various other people’s movements.

5.Vice Chairman comrade Kiran formally inaugurated the convention by lighting a traditional oil-fed lamp and delivered a speech shedding light on the need to build a new type of communist party by breaking relationship with the opportunist group.

8.The inaugural session was, then, declared concluded.

Chaired by comrade Mohan Baidya ‘Kiran’, the senior chairman of our party, the Unified Communist Party of Nepal (Maoist), and conducted by the general secretary Ram Bahadur Thapa ‘Badal’, the closed session of the national convention of the revolutionary faction of our great and glorious party, was started from the early morning. In the closed session, discussion and deliberation were held on the proposed agenda in a democratic atmosphere and the decisions taken are as follows:


1.Comrade Kiran presented the political report on behalf of the central committee and shed light on it in brief.

6.Following the presentation of suggestions from different groups, a meeting of the central committee of the ideological faction was held and it decided to respect the opinions and views presented by different groups and accordingly enrich the political report and the interim constitution by incorporating important suggestions.

8.General Secretary comrade Ram Bahadur Thapa ‘Badal’ placed the political report and interim constitution for adoption before the national Convention. And the National Convention adopted both the proposals unanimously.

i) The salient features and the conclusion of the political report can be presented as follows.


•Firstly, the report has analyzed the present national situation. The main reasons behind the dissolution of the Constituent Assembly without writing constitution are said to be the inaction and incompetence of the principal leaders of the big parties in addition to the domestic and foreign reactionary conspiracy. Admitting that the contradiction between comprador, bureaucratic bourgeoisie and feudal class and Indian expansionism at one pole and the broad Nepalese people at the other is the principal contradiction, the political report has, thus, stressed on the need to raise strong voice in defence of national independence.

Similarly, analyzing the international situation, it is stated that the contradiction between the imperialism and the oppressed nations is the principal contradiction at present. In this course, the report says that the United States of America and other imperialist countries have undergone economic crisis; it has had serious negative impact on the life of the people all across the world and it has hinted that this situation is leading to create a multi-polar world. And accepting that the subjective forces are weak compared to the objective situation, it has laid special emphasis on the need to create that kind of strength on the part of genuine revolutionary communist parties in the world.

•The report has summed up the events developed after the initiation of great People’s War, the party task and revolution. They are as follows:

1.Even though the policy that the Second National Conference had adopted vis-à-vis the all party conference, interim government and writing of the constitution under its leadership was basically correct as a tactic, but the report has drawn up a conclusion that it had opened up the door for the party to get entrapped in opportunism and it has concluded that the naming of the series of ideas developed in the form of centralized expression of the collective leadership in the form of Prachanda Path has been proved to be wrong through practice.

2. In the draft proposal of Democracy of the 21st century, the Central Committee had accepted that the role of friendly parties will be competitive not only cooperative. But in course of peace talk, it seemed that party started to compete politically with the other forces, which are not friendly. So it has been concluded that the main objective of presenting that proposal in the Central Committee was to give up the goal of people’s democratic and proletariat state power. Also, it has been concluded that it is necessary to develop democracy in the Communist Party, People’s Liberation Army and the New State.

3. In the backdrop when the democratic republic adopted as a tactic by Chunwang meeting has turned into strategy and showing the Chunwang position that the analysis of imperialism by Lenin and Mao has lagged behind, the strategic adoption of the old parliamentarian politics by saying that there is a need to develop strategy and tactic in a new way has been concluded to be wrong.

4. Without guaranteeing to establish the achievement of People’s War and Mass Movement, the hasty compromise reached in the agreements including 12-point, 8-point, Comprehensive Peace Agreement etc. has seriously hurt at the credence and value of the Nepalese revolution, people’s war and the Nepalese people’s expectation and aspiration of transformation. In the process of revolution agreements can and should be made. But, while doing so, one must not have betrayed the interest of the proletariat, masses of the people and revolution as well. However, the same has happened.

5. Party’s revolutionary faction has been working hard to correct every mistake, weakness and deviation and in this respect the conventions and the meetings including in Kharipati and Palungtar have played important role in this regard.

6. The creation of People’s Liberation Army, establishment of base areas and people’s government, role played by workers, peasants, women, indigenous nationalities and Dalits; and the awareness developed in this whole process are some of the major achievements we have gained and taking all these in a positive sense a conclusion has been drawn up that we have to move forward by standing upon this base.

7. One of the main decisions made by this historical national convention is that there is a serious right neo-revisionist deviation in both Prachanda and Baburam. Admitting that they had played a positive role in the course of revolution and the great people’s war, a conclusion has been drawn up that they have undergone a serious deviation in the later period. This kind of deviation has surfaced in every realm of theory, politics, philosophy, strategy, tactics and conduct as well. In the situation when this deviation has been manifested in rightist liquidationism, class and national capitulationism and when the party has been changing its colour it has been decided that the formation of a new type of the communist party is a must. And, realizing the fact that there are several revolutionary comrades within this neo-revisionist group, we have taken up decision to appeal all of them to be a part of the revolutionary current by rebelling from such opportunism.


9. The convention has decided to defend the present achievements like republic, federalism and secularism. And in the present situation when the country is still in a semi-feudal, semi-colonial and neo-colonial condition, admitting that the need to make a new democratic revolution in Nepal is a must, the convention has decided to go along the process of revolution. In the present context, the establishment of People’s Federal Republic and the question of defending National independence have been adopted as the main political tactics.

10. When the dreams of workers, peasants, women, Dalits, indigenous nationalities and the masses of the oppressed region manifested in the great people’s war, mass movements, Madhesh movements and the same conducted by indigenous nationalities and the masses from the oppressed region have not been fulfilled and when the domestic and foreign reactionaries and also the opportunists from the party have betrayed the process of writing constitution, a decision has been taken to march ahead along the direction of preparation of Nepalese revolution through people’s insurrection by taking up the issues of class emancipation, the federalism with identity, inclusive proportional representation, privilege and the prerogative etc.

11. Paying attention to the worthlessness of the reinstatement and re-election of the CA in the present context when the CA has been dissolved, it has been decided that the tactic of All Party Round Table Assembly, United Interim Government and the new political way out through this is the correct tactic and it should be made complementary to the main tactic of People’s Federal Republic and the defence of national independence.

12. By way of waging ideological struggle against neo-revisionism, the convention has taken decision of organising a systematic, disciplined and revolutionary party, preparing a code of conduct from the CC and firmly implementing it and systematizing people’s volunteers and mass organisations. Also, a decision has been taken to build a united front comprising of the forces including patriots, republicans, leftists and pro-federalism forces.

14. The main aspects of the party’s interim constitution adopted by the Convention are as follows:


•The guiding principle of party will be Marxism-Leninism-Maoism.

•The party which is being organised by breaking relations with opportunists will be named as the Communist Party of Nepal-Maoist.

•The tasks related to Party organization, mass organisations, department etc. will be systematised, party will be made well-disciplined and militant on the basis of collective decision and committee system. Financial transparency and audit system will be emphasised.

15. After the political resolution and interim constitution of the party were adopted, the central committee meeting was held with the chairmanship of the eldest member Comrade Ishwori Dahal i.e. Ashare Kaka. The meeting elected Comrade Kiran as Chairman, Comrade Badal as General Secretary, Comrade C. P. Gajurel as Secretary, Comrade Dev Gurung and Comrade Netra Bikram Chand as Standing Committee Members and also decided to continue with the same Polite Bureau Members, CCMs, and the Advisory Committee members who were since before in the revolutionary faction. And, it was decided to float a proposal for the mandate to include more comrades in the CC.


16. Comrade Ram Bahadur Thapa presented the decision adopted by the CC before the National Convention for adoption and all those decisions were adopted unanimously.

17. Comrade C. P. Gajurel presented the proposal on current issues and it was adopted unanimously.

a. Finally, the National Convention was concluded. In this concluding session Comrade Kunta Sharma from advisory committee, Comrade Takma K.C. from the martyr’s family, Comrade Bishnu Pukar Shrestha from intellectual, and Comrade Maila Lama from the Cultural Front delivered their best wishes and happiness for the success of the Convention.

At last, Comrade Kiran, along with his commitment to firmly propelling the party task and revolution forward, delivered his concluding speech by saying thanks to all who contributed for the success of the Convention.


B. At the last, the programme was concluded with chanting of the revolutionary slogans in an emotional and animated atmosphere.