From Arab Maoists - No to the imperialist Zionist and reactionary aggression on Syria and all our Arab country! 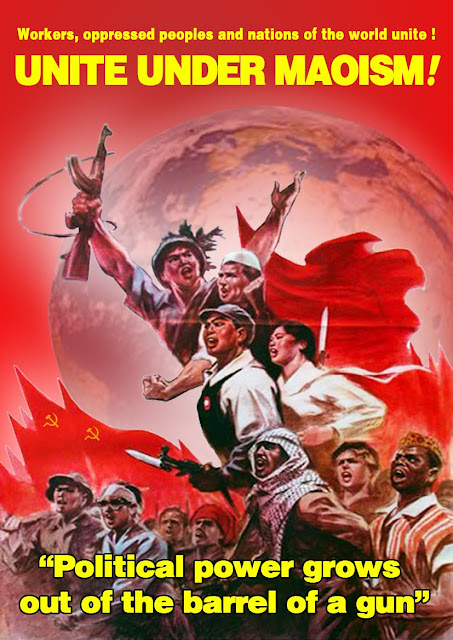 Workers, oppressed peoples and nations of the world, unite!

No to the imperialist Zionist and reactionary aggression on Syria and all our Arab country!

These days the imperialist Zionist and reactionary attack on our Arab nation is sharpened. In the previous years, imperialists and their puppets used their armies, weapons and bombs, however, nowadays they are laying together with all their armory behind their actual mask : the slogan of “democratization”, calls of “peaceful change”, “political freedom”, “pluralism”, “parliamentary road” and sinister electoral plays which will never change the political and economic situation but will only lead to further intensification of oppression slavery and fragmentation we are living in our Arab country.

Laying behind such fake mask and slogans, imperialists are nowadays pushing their local Arabic obscurantist and opportunist puppets to execute their dirty plans. It’s again the drums of war and military aggression: after the occupation of Iraq in 2003, Libya in 2011, here are the imperialists and their tools the Zionists and local reactionary classes intensifying their campaign, gathering their mercenaries to launch war of aggression against Syria. The world imperialism, living the structural economic crisis, is trying to overcome this situation by throwing the crisis consequences on oppressed peoples and nations.

Our Arabic country is one of the oppressed peoples and nations whose hope of national liberation and radical social emancipation is subject to all kinds of aggression by mobilizing all military and political means, economic subjugation plans and disinformation… imposing national and class capitulation is their entry to perpetuate our oppression, the persecution and fragmentation of our nation and our land’s occupation. Our people’s status of living in cities and in rural areas reached a degree of misery led to an inevitable blast emerged into uprisings within rural areas and cities.

Mass got up spontaneously against hunger, unemployment and social injustice… got up to emerge her shelved anger which the genuine revolutionary forces couldn’t frame or influence (due to her absence or weakness) by high lightening to the masses the real causes and sources of their misery with connection to the reality of imperialists oppression imposed on our Arab country (through the colonial settlement intervention and the fragmentation of our land) and which its confrontation represents the principle entry to social emancipation for oppressed people through grabbing all Political power in favor of oppressed classes alliance and this by the sole mean for victory :The long-term people’s war.

The global economic crisis is not the recent days or months outcome nor the struggle between imperialists themselves nor their oppression to world peoples and nations whose struggle has never stopped. For this, imperialists and their puppets were preparing plans and tactics to insure the survival of our oppression and crush any revolutionary forces standing against them and mobilizing the mass to fight their projects. And when the ideological & political clearness were absent and stumbled the building of the revolutionary organizational weapons to lead people and fight our enemies: the world imperialists (mainly U.S) and her tools the Zionists and local Arab puppets, the so-called “Arabic Spring” has been launched representing the practical slogan of the imperialist reactionary colonial plan to perpetuate oppression and feudal exploitation.

The imperialist (mainly U.S) project the “New Middle East” is the reactionary plan prepared to more vanquish our people and all our genuine revolutionary forces.

What our Arab nation is witnessing under that so-called “the Arabic spring” is the opposite of the Arab national Democratic revolution, the radical solution towards national and class emancipation.

It’s an imperialist plan of aggression against our nation and all her revolutionary forces struggling imperialism and its lackeys (Zionism and Arabic local puppets).it’s an aggression aiming to cut the way in front of the real radical popular revolution, defeat all revolutionary forces not willing to capitulate, aiming to further fragmentize our land on sectarian and ethnic basis and also to perpetuate their hegemony on our natural and strategic resources.

Our main task now is to stand firmly against the imperialist, Zionist and reactionary aggression, stripping all their old and “new made” local reactionary puppets. This aggression appears in all its details and risks through their targeting of our people in Syria. Our Arabic oppressed masses, The target of this aggression is the whole Arabic Nation, all her revolutionary oppressed classes, all her revolutionary recusant forces and not only in Syria.

This aggression war do not target Syria as a steadfast citadel against capitulation and as incubator of all resistant movements only but it is an attempt to impose new fragmentation project on our Arab country. A ”21st century Sykes-Picot “,a plan of further fragmentation on sectarian and ethnic basis of our land , sinking our people into reactionary civil conflicts and which its features can be seen through what happened and happening in Iraq, Sudan, Libya, Egypt, Lebanon and through the obscurantists gangs’ practices in Syria and other regions of our Arab motherland.

Those advocates claiming to overthrow the regime in Syria, claiming “the international Umbrella” and the “international intervention” of which the features are well known to us through all the Arab blood liquefied in Palestine, Iraq, Libya ,Somalia and Lebanon… and through the history of long struggle, do not represent any revolutionary project nor any revolutionary forces.

Those coming on imperialists tanks or claiming imperialists’ intervention, who are holding political power in diverse Arabic areas through electoral plays and parliamentary road co-existing with all class enemies (what is happening in Tunisia, Morocco, Libya and Egypt) can only be imperialists’ puppets and renewed lackeys serving her interests and insuring her hegemony on our Arabic people and can only be enemies to our oppressed people’s revolutionary ambitions, and will never represent an ally to our people’s causes nor defenders of our occupied land nor advocates to sustain the heroic national armed resistance.

Our Arabic Toiling people, Targeting Syria today is the assault on Arabic resistance and her steadfast forces, strategically, an attack on our sole option to achieve real national and class emancipation: the protracted Arabic people’s War ,an aggression on the path to which all efforts have to be mobilized . Targeting Syria today is serving mainly the world imperialism and its tools Zionists and local reactionary.

Thus, standing with Syria today is hugging on our revolutionary principles  and path and aligning with our people. In short, it is defending armed resistance choice, forces and program. Standing against the imperialist Zionist reactionary aggression in all its forms, against fragmentation and the plan of targeting revolutionary programs and forces is standing in the same trench with those fighting imperialist intervention fragmentation plans, standing with those withstanding and providing sacrifices and Martyrs. Standing against the imperialist Zionist reactionary aggression is by the rejection of all peaceful illusions towards our enemies, by standing against all those sustaining the imperialist intervention and our country’s division (either by theorizing, by justifying, by fighting or even by adopting neutral attitudes).

Fighting this reactionary imperialist plan is also by mobilizing our people to stand against the imperialist Zionist reactionary aggression, by sustaining the national regime in Syria and her resistant Army in the actual running battle against NATO, Zionists and their local puppets : the compradors, feudal and Zionist Media (Aljazeera, Al-Arabia channels…) ,fighting this plan by disclosing the reality of the “New middle East” imperialist project in all its aspects (political, economic, cultural and military...)and down its practical slogan “the Arabic spring”.

The genuine revolutionary forces ought to persist and mobilize all her efforts to build the three magical weapons, the sole mean to save our people, liberate  and unify our land and resources, our sole guarantee for Victory.

We are within a decisive battle of the whole nation in which there is no place to greyish attitudes or neutrality, trenches are clear and every shot bullet has her own specific direction …. Within this battle everybody has to choose his trench either with our Nation, with the oppressed and with the revolutionary resistant forces or with all the Imperialist Zionist reactionary opportunists’ aggression… No third trench.

Long live the heroic Arab masses and her revolutionary forces struggle against imperialists and their puppets!

No to the imperialist Zionist and reactionary war of aggression on Syria and all our Arab motherland!

All Imperialists and their puppets are paper tigers!

secondly i do not share the same view as theirs concerning the position towards the Assad regime,because its not a national regime.

its a reactionary. regime we have not defend it,but in the moment of the imperialiste aggression we have to work with them against the imperialiste agression and in the some time we work always to destroy it.(as a real communiste party or organisation) !

Thank you for your comment I thought the statement was from Moroccan and Tunisian comrades.

If anybody knows who published this statement let us know.

I was first published on Maoist Road.

it is vitally important for Arab Comrades to take up Bob Avakian's New Synthesis, without this, the mistakes of Nepal and Peru and elsewhere will be repeated. In fact, Democracy and Class Struggle has clearly not taken up the New Synthesis, and was clearly confused about Nepal and now seems to have abandoned revolutionary Communism for a type of Welsh Nationalism. So, I urge Democracy and Class Struggle as well as all Arab revolutionaries to take up the New Synthesis.

Democracy and Class Struggle supports the democratic rural class struggle against Crown Estates in Wales not Welsh Nationalism - does Bob Avakian now support the British Monarchy ? The Queen will be pleased !

The New Synthesis sounds definately monarchical if not relgious to me.The Talmud of the 21st century to be recited until enlightenment comes.

We need no futher Prachanda's or Avakians - acquiring personal power and elevating themselves above the masses with their religious political authority.

Always thought thought the class struggle against British Royal and Aristocratic Estates by unenlightened peasants like myself was Maoist but I fogot Avakian is Post Maoist so land and liberty rural struggles are retro and beneath this fountain of advanced Talmudism.

these are not arab maoists...they are known to have been working with the BenAli tunisian president and with the iraqi dictator saddam husein...we can oppose the american or western interventions in the third world but without being so defending the arab dictatorships and against the masses...Mao taught us how to build the masses line and how to serve the people ... the true arab maoists are represented on this website:
http://arabmaoists.wordpress.com

These slanders are outrageous and false. Democracy and Class Struggle has lost its way, and without the New Synthesis, it will lapse into revisionism and petit bourgeois Welsh Nationalism.