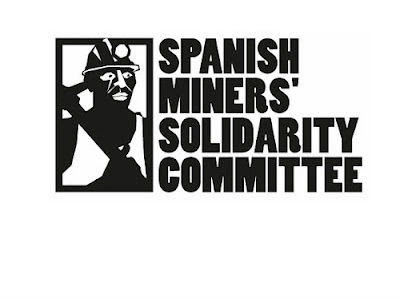 Spanish Miners' Solidarity Committee launched on Monday, June 11 in Sheffield, by former miners and others who were involved in the 1984-85 miners' strike in Britain. This is the text of their message to striking Spanish miners:

Dear comrades,
Former miners and trade union supporters in the UK last night launched the Spanish Miners’ Solidarity Committee in Sheffield, Yorkshire.
The Committee pledged itself to campaign nationally in the UK labour and trade union movement and in the mining community for solidarity with the striking miners and their families in the Spanish Asturias, Aragon and Léon coalfields.
UK supporters of the Spanish coal miners know only too well the consequences – economic, social and political – of butchering the coal industry.
Today there are just a handful of deep mines in the UK. This is all that remains of an industry that even 30 years ago employed more 200,000 men.
In its place, there is only mass unemployment, poverty and  social deprivation and decay. That future faces the Spanish miners if they are defeated
The Committee has also committed itself to raise funds for the families of the striking miners, an effort that has already begun, and maximise assistance to their just struggle.
A letter of solidarity, signed by former miners and miners’ leaders from the main UK coalfields and other trade unionists, has been prepared and will be sent to the Spanish miners’ organisations during this week.
The Committee’s efforts have already won the support of the internationally renowned film-maker Ken Loach who asked us to send this message to those struggling in defence of pits, jobs and communities in Spain..
His message?:  ‘"Not for the first time, it is miners who fight on behalf of all working people. This crisis causes such misery through mass unemployment and attacks on working conditions and the social wage. The responsibility lies with the ruling class and those who defend an intolerable, unjust system. Good wishes and solidarity"
Two representatives of the committee, which was launched by the Miners Info network, will travel to Spain for discussions with Spanish miners and their families later this week.
Graeme Atkinson, John Cunningham, John Dunn and Paul Meszaros (on behalf of the Spanish Miners’ Solidarity Committee)
For further information:
E-mail:  SMSC@talktalk.net 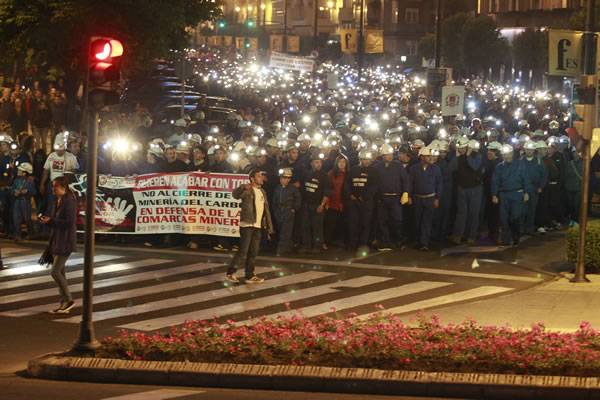