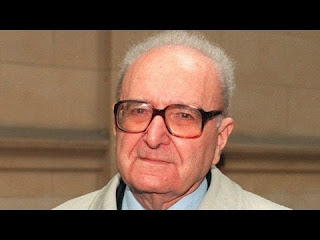 I wrote these notes over ten years ago on Roger Garaudy - given that his death has been announced, I thought it suitable to make them public.

"Thus the French revisionist philosopher Roger Garaudy (he is neither the only one nor the first) in his booklet Lenin condescendingly acknowledges the services of Materialism and Empirio-Criticism in presenting the fundamentals of materialism in general, which are neither characteristic of Marxist materialism nor related in any way to dialectics; this, he says, is 'kindergarten materialism' and nothing more.

The meaning of similar attempts is the same: to portray Materialism and Empirio-Criticism, this classic work on the philosophy of dialectical materialism, which elucidated in general form all the major contours and problems of this science, as a book devoted only to one 'side of the matter', only to 'epistemology', only to that supposedly narrow circle of problems which were thrust on Lenin by the specific conditions of a polemic with one of the minor schools of subjective idealism.

Explained in such a way, Materialism and Empirio-Criticism is robbed of its general philosophical significance beyond the bounds of this special argument; the significance is lost of a book which completely exposes every kind of idealism, not only and exclusively subjective idealism.

It is no accident that it was Roger Garaudy's misrepresentation of Lenin's work Materialism and Empiro-Criticism the classic exposure of the "Godseekers: Bogdanov and Lunacharsky as explained by llyenkov that opened the foodgates to fideism as Lenin would say. .
Posted by nickglais on 6/20/2012 04:32:00 AM

Maybe have you not heard about, but his religious "Good" and "Evil" vision finished even more sadly, in denying Holocaust, pretending 'unmask' zionist propaganda and defend the palestinians... Indeed, he was old (83), but it's a kind of "logical" endpoint

Garaudy has been praised throughout the Islamic World:

In June 1999, Jordanian intellectuals named Garaudy “the most important international cultural personality of the 20th century.”

Garaudy was a co-winner of the King Faisal International Prize for Services to Islam in 1986.

Nasrallah went on to praise Garaudy for exposing “alleged Jewish Holocaust in Germany” and stated that Garaudy “proved that this Holocaust is a myth.” Nasrallah also criticized France for putting Garaudy on trial.

With the end of Arab Nationalsim and the rise of Islamism Garaudy had his opportunity to undermine the communist movement in the Arab world just has he had done in Europe following the 20th Congress of the CPSU.

He will be forever an example of the revisionism that the communist movement has to combat to succeed - death to Garaudyism in the 21st century.