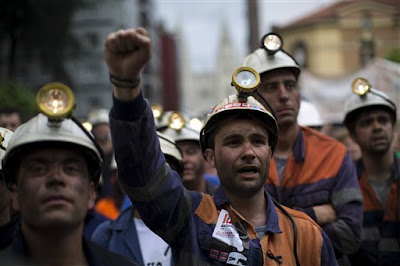 Spanish miners will begin a march on Madrid this week as they escalate their ongoing protests against moves by Mariano Rajoy's austerity government to slash subsidies to the coal industry.
Unions have claimed the entire industry is in danger, and miners have engaged in violent encounters with police in pit towns in the northern region of Asturias over the past three weeks.
On Monday a general strike hit mining communities in Asturias, Leon, Galicia and Aragon. The miners have been on strike for three weeks in an attempt to force the government to negotiate.
Clashes have taken place almost daily, with miners saying they have nothing left to lose. They have shot firework rockets at police lines, and plumes of thick black smoke have become commonplace where tyres have been set alight to block roads.
Police have responded with teargas and baton charges. Three journalists and four police officers were injured near a pit in El Entrego on Friday.
"I'm not going back to work until a solution is found to this," one masked miner told television cameras. "If that means I have to sack myself, well then I will."
Subsidies to the coal industry are one of the major casualties of the austerity measures brought in by the conservative Rajoy government, which took power in December.
Next year's budget includes a 63% cut in subsidies given to the mostly loss-making mines. That will save Spain €190m as it seeks to cut its budget deficit and reduce its borrowing needs at a time when it is having increasing difficulty raising loans at sustainable interest rates.
The cuts put at risk 8,000 mining jobs and thousands more that depend on their salaries. "This town will die," complained a shop owner in Langreo.
In a country where unemployment is already 24% – and more than 50% among the under-25s – many miners fear they have no chance of finding alternative work in the foreseeable future. They want Spain's government to keep subsidies going until 2018, which is the limit placed on them by the European Union.
More than a dozen miners have locked themselves into three mineshafts in Asturias and Leon, with the longest protest already in its fourth week.
Protesters have used rockets, stones, nuts and bolts in their running battles with police. Up to 60 roads have been blocked in a single day, as well as local train lines.
Government officials have warned that the miners will be held responsible for any future clashes. "Whenever the police are obliged to intervene it is because a situation of risk has already been created," said the government delegate to Asturias, Gabino de Lorenzo. "Responsibility for whatever may occur lies firmly in the hands of those who create these situations."
Trade unions have denounced the violence. "We are not responsible for these sort of actions, which are the exception and should not be repeated," said the local branch of the Workers Commissions.
Miners argue that Spain's limited energy resources mean the country must keep the mines open to protect itself against future shocks and price rises in the global energy market.
"If the current proposal is not changed the closure of mining and the paralysis in the reactivation of the local economy will have a major impact on our energy policy, as coal is a strategic sector for a country with a huge dependency on energy imports," a spokesman for the Asturias mining branch of the General Workers Union said.
The region's socialist prime minister, José Ángel Fernández Villa, is sympathetic. "Neither Asturias nor Spain can allow themselves to do without coal for reasons that are at once strategic, social and regional," he said.
But talks between miners and the industry ministry have broken up amid growing rage against Rajoy's government. A suited dummy of the prime minister could be seen hanging from one of the towers at Caborana mine near Oviedo on Monday.
One hundred miners will set out walking from pit towns around the country on Friday, unions leaders announced on Tuesday. Their march is expected to take several weeks and will end with a mass demonstration in the Spanish capital.
The last time protesting miners visited Madrid there were police baton charges after they let off detonators outside the industry ministry. "Next time we will be back with dynamite," some chanted.


Ciñera miners have reported the use of illegal weapons by the troops who invaded the village the past days. Taser guns, batons with extendable metal and pepper gas canisters were added to the firing of tear gas and rubber bullets.
Posted by nickglais on 6/20/2012 06:07:00 AM