Comrade Murad El-Chuini, released less than a month ago after serving 4 years in jail is arrested once again! 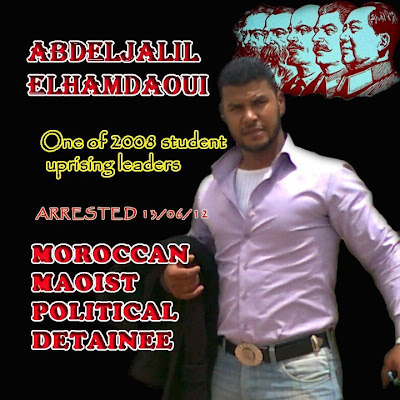 Three days ago, and when he was in his way to Marrakech, comrade Abdeljalil Elhamdaoui was arrested in Ouarzazat. Com. Abdeljalil was one of the inspiring leaders of the heroic Student Uprising in 2008, of The Student Union (NUSM) and of the revolutionary trend within it called The Democratic Basist Way (Maoist).

Before that uprising took place, he has been excluded by the university decision due to his relentless struggles and activism and his unique dedication to mass cause. His militant and fighting reputation, as well his simple and clean soul, has gathered a mass of students around him in a battle against the exclusion decision, but it also made him the most WANTED by reactionaries.

Since 2008, he has been prosecuted by the police until he was caught the 13th June, 2012. yesterday the took him from Ouarzazat to Marrakech for investigation. And investigation in Morocco is the equivalent of torture and abuse!

RALLY FOR THE SOLIDARITY WITH OUR COMRADES AND ALL POLITICAL DETAINEES!