Democracy and Class Struggle says nothing exposes the fake patriotism  of the Le Pen's more than their apologetics for the Vichy Government and the Nazi Occupation of France, it took immigrants to defend the honour of France from the Vichy Le Pen collaborators of yesterday.

Red Salute to the Group Manouchian may they inspire a new generation to combat Fascism in France.

FTP-MOI were a sub-grouping of the Francs-tireurs et partisans movement in the French Resistance to the German occupation of France during World War II.

The FTP-MOI groups were had been created in the Paris region at the same time as the Francs-tireurs et partisans, in 1941.

Their ranks were filled with members from the Main d'Oeuvre Immigrée.

Foreign communists living in France but not part of the French Communist Party had been put in place in May 1942.

Although integrated with the FTP, these groups depended directly on Jacques Duclos, who passed on orders from the Communist International (Comintern).

The FTP-MOI were among the most active and determined resistance groups, particularly as being foreigners,and mostly Jews, they were under the direct watch of the Vichy regime, which left them no choices but secrecy or internment.


Because they depended directly on the Comintern, with Duclos as intermediary, it was often they who were on the front line when the order to fight came from Moscow.

Their trial was held in front of a German military tribunal at the hôtel Continental.
It began on 17 February 1944, lasted between two and four days, and after a 30-minute deliberation, reached the following verdict:

23 accused were condemned to death, with no possibility of appeal.
22 were shot immediately on the 21 February 1944 at mont Valérien.
The execution of Olga Bancic was suspended for further enquiry.
In a new sentence passed on the 10 May 1944 at Stuttgart, she was condemned to death and promptly beheaded by axe.

One accused, Migratulski, was transferred to French jurisdiction.

The red poster reads:
"Liberators? Liberation by the army of crime!"

Heroes and Martyrs of the Resistance - France 1940-45
The Manouchian Group (The Last Letters)
http://www.marxists.org/history/france/resistance/manouchian/index.htm

"There was such a friendship between us, between all these people coming from everywhere, Jews, Spanish, Italians, Germans, Armenians and French of course.

A brotherly friendship which surpassed all that you can imagine";

He is one of the only two survivors of a group called Groupe Manouchian under FTP-MOI; that was created at the Spring of 1942.
It was an extremely well organized group.

On one hand it was formed by elderly militants and on the other hand by young Parisians of about 20 years old who fought both to defend their views and against the Nazi occupation.

The red poster (Affiche rouge) which denounced them became famous in a very sad way as it meant the breaking up of the group. 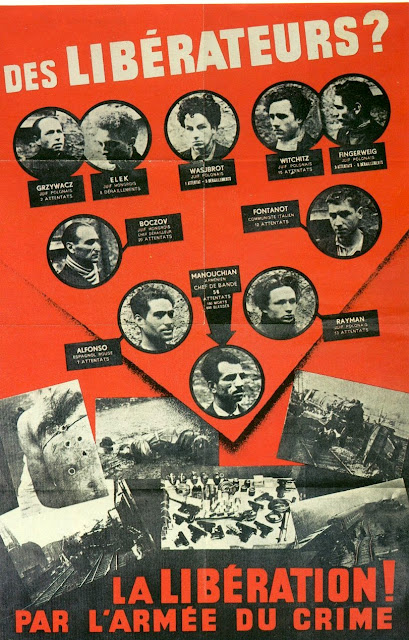 The bottom features photographs of:
the right shoulder and right chest of a corpse, riddled by bullet holes
a dead body lying on the ground
a derailed locomotive
a derailed train
a collection of small arms, grenades, and bomb components, displayed on a table
another derailed train.
Posted by nickglais on 4/23/2012 12:33:00 AM