Support Meeting on Arab Revolution in Paris on 15th October 2011 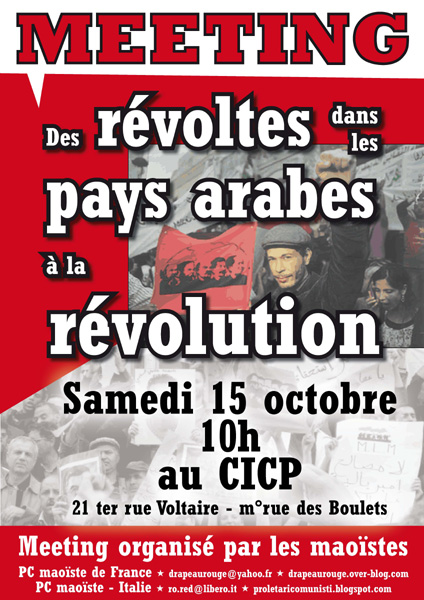 Meeting Proposed by the Maoist Communist Party of Italy, Maoist Communist Party of France and with collaboration of supporters of MKP France and with the interventions of the Maoist Movement of Tunisia and Maoist Morrocan Comrades, also all organisations and antimperialist commitees in France and other european countries, and with invitation of organisations and parties of the oppressed countries that have possibility to participate, we are organising a meeting in Paris 15th October.

'From Arab revolts to New Democratic Revolution and the march to socialism and communism'.
It is the first public and open reflection of the Maoist forces on the revolt situations and the task of supporting, particularly support for Maoists in the Arab world, in the context of the general support to all antimperialists forces and peoples in struggle in arab world.
contact for information and participation:
ro.red@libero.it Italy
drapeaurouge@yahoo.fr France

Democracy and Class Struggle will be Reporting from this important conference
Posted by nickglais on 10/07/2011 01:04:00 PM