Party decision not to sign BIPPA says General Secretary Badal, action to be taken against Bhattarai 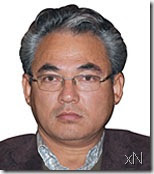 Kathmandu, 24 October: General Secretary of UCPN-Maoist Ram Bahadur Thapa ‘Badal’ has said that UCPN-Maoist had decided not to sign on the agreement BIPPA, which was sure to be proposed by Delhi. The then party standing committee had decided not make any agreement on BIPPA if India wanted.

Before GS Badal, standing committee member and party whip Dev Gurung had said in the media that the treaty BIPPA was decided not to sign and PM Bhattarai was ordered not to do. According to him, BIPPA is more dangerous and traitorous than the treaty of 1950 signed by the then PM Mohan Samsher Rana.
Posted by nickglais on 10/24/2011 02:25:00 PM