“I believe that the party should not split. But this is a different context. There is no point staying in unity while putting the nationality at peril,” said Thapa. 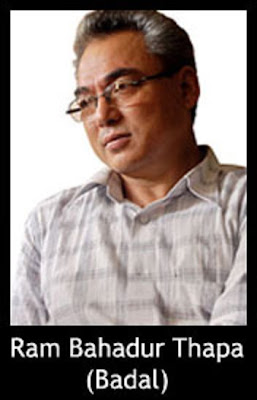 BAGLUNG, OCT 20 - UCPN (Maoist) General Secretary Ram Bahadur Thapa has said that the identity of the country cannot be put at stake in the name of keeping the party unity intact. Thapa alleged that old parties of the country along with a section of his party (Maoist) have been working under the direction of India.

Thapa remarked that the twin tasks of peace process and constitution drafting could not be completed due to submissive attitude of the political parties towards India while hollering the slogans of nationality in pretension.

“I believe that the party should not split. But this is a different context. There is no point staying in unity while putting the nationality at peril,” said Thapa.

Thapa made such remark on the very day Prime Mminister and his party Vice Chairman Baburam Bhattarai embarked on an offical visit to India. Thapa said PM Bhattarai , who is trying to defend the minister who gave anti-national statements, is afraid to raise his voice against the interferene of India. He urged PM Bhattarai not to sign any treaty that might have a long-term effect on the country. He also urged Bhattarai to request India to stop meddling in Nepal’s internal affairs.

Thapa is currently in Baglung to take part in a programme organised by the hard-line faction of the party led by Vice Chairman Mohan Baidya.

Chairman Prachanda aka Pushpa Kamal Dahal’s faction has decided to formally boycott the programme with a written application. “This programme is against the pact, which states that there would be no formal programmes before the next Central Committee meeting. Hence, we have decided to boycott it,” said District Co-in charge Dhan Prasad Sapkota.

However, General Secretary Thapa said the formal programme was organised after Chairman Prachanda  breaches the understanding by organising separate programme in Chitwan and Pokhara.