Dahal aka Prachanda and Bhattarai will be expelled from party: Gajurel 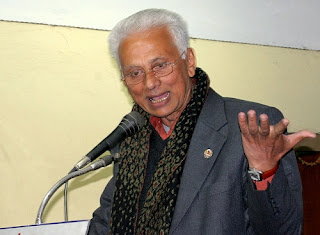 In what signals the growing crisis within the main ruling UCPN (Maoist), party secretary C.P Gajurel Tuesday went on to accuse party chairman Pushpa Kamal Dahal and Prime Minister Baburam Bhattarai of being ‘anti-national’ and that the two “have no right to stay in the party”.

Speaking at a programme in Sindhuli Tuesday, Gajurel warned that the chairman Dahal and PM Bhattarai will be ousted from party for undermining the revolutionary path of the party.

“Dahal and Bhattarai acted as agents of the India and discredited the people’s revolt. They have no right to stay in the Maoist party,” the tough-talking Maoist hardliner said.

Gajurel insisted that the Bilateral Investment Promotion and Protection Agreement (BIPPA) signed with India proved the ‘anti-national’ character of Dahal and Bhattarai.

He even claimed that the party will organise a formal programme to announce the ouster of Dahal and Bhattarai from the party.