Do Revolutionaries Uphold the October Model or Seek to Build Base Areas ? by Joseph Ball 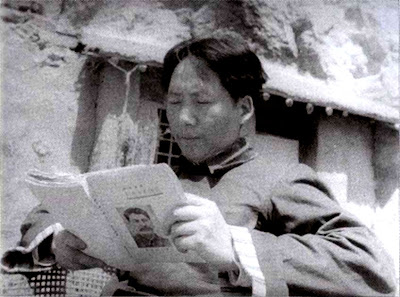 Democracy and Class Struggle is pleased to publish this article from Comrade Joseph Ball.

Democracy and Class struggle welcomes this thoughtful contribution to the debate about the nature of the Revolution in Imperialist Countries.

The views expressed in this article are those of Joseph Ball and not necessarily those of Democracy and Class Struggle.

The recent ‘Occupy Wall Street’ movement raises the question of which model for revolution is most likely to be adopted in the coming years.

One model is the October Model in which an insurrection leads to the conquest of state power, followed by civil war against the reactionaries.

The other model is the model of building revolutionary base areas in certain parts of a country and then developing revolutionary struggle by expanding these areas, until the final goal of state power is reached.

‘Carry Forward the Peasant Struggle by Fighting Revisionism’ when he wrote:

‘ …destruction of State power is today the first and principal task of peasant movement. If this cannot be done on a country-wide, State-wide basis, will the peasants wait silently? No, Marxism-Leninism-Mao Tsetung Thought has taught us that if in any area the peasants can be roused politically, then we must go ahead with the task of destroying State power in that area. This is what is known as peasants' liberated area.’

Typically, Maoists have tended to argue that an‘October Model’ is appropriate in imperialist countries. Maoists have hoped that something like the 1968 movement or even protests like the ‘Occupy Wall Street Movement’ could at some point spark off a major insurrection leading to the capture of state power in a relatively short space have time.

The ‘Base Area’ model is seen as more appropriate for mainly rural societies where the urban proletariat is not so numerous.

However, 35 years of defeats have tended to undermine faith in both models. In the imperialist countries Maoists have grown disillusioned with the idea of waiting for some revolutionary crisis to occur in order to launch an ‘October style’ revolution. Related to this, in some cases, is the influence of ‘Third Worldism’. The old revolutionary slogan was ‘They’ve got the guns but we’ve got the numbers.’

The problem for revolutionaries in the First World is that ‘they’ tend to have the guns and the numbers. There are often a minority of poor and unemployed in First World countries but most people are affluent. The standard of living of the people is subsidised by cheap imports from exploited labour in the Third World. Immigration controls (generally popular with First World workers) prevent Third World workers getting better paid employment in the West and divide the world’s working class.


In the Third World mainly rural revolutionary struggles are being fought in the Philippines and India. However, these struggles have gone on for many decades. The failure to take state power has been used by some to justify ‘new’ varieties of Maoism. Some of the supporters of the Bhattarai’s revisionist line used the length of the struggles in the Philippines and India to justify the abandoning of revolutionary base areas in Nepal by the Maoists and the entry into bourgeois politics.

Others have argued for some new stage beyond Maoism, ‘a New Synthesis’. They argue that communism is 'degenerating into a residue of the past' and only by the ‘appreciation’ of Bob Avakian and his works can salvation be found. Bob Avakian’s works such as ‘Democracy Can’t we do Better That?’ and its sequel are important contributions to revolutionary thinking. The debate between the Revolutionary Communist Party (USA) and the Unified Communist Party of Nepal (Maoist) is of utmost importance. But when we study the ‘New Synthesis’ and try to ascertain what it is here that is meant to ‘save’ the communist movement we can only scratch our heads in puzzlement. The ‘New Synthesis’ seems to be an attempt to come up with a hybrid of John Stewart Mill’s thinking and Maoism!

Unsurprisingly, not many have been tempted by this eclectic brew despite passionate advocacy by Avakian’s followers.

It might be that 35 years of defeat will just continue their demoralising influence and communism will indeed find itself 'degenerating into a residue of the past’.

However, another scenario is possible which those with an interest in revolutionary movements might wish to study.

This scenario is suggested by the fact that world imperialism is very strong in the present era and the revolutionary seizure of power at the national level seems difficult. The revolutions in Russia and China were facilitated by world wars between the imperialists. Since then the imperialists have learnt to be united. Seizing and, indeed, keeping power in one country is all the more difficult as the supporters of Bhattarai never ceased to remind people.

Yet, there may be some who see the sustainment of some degree of red power in areas of India and the Philippines for so long as a source of strength not weakness. It is interesting to note an undercurrent of interest in Maoism among radical youth around the world, including in the imperialist countries-despite the failure of revolution in Nepal.

What is going through the minds of these youth? It might be they feel that the revolution may not necessarily come in ‘one country after another’ just at the moment. Perhaps it will come in one ‘region after another’. Perhaps they agree with Mazumder who said, that if revolutionaries cannot take state power immediately, then they should establish red power in one area. Mao said that a socialist nation should be a ‘base area for world revolution’. It is not as if there is some absolute divide between region and nation here. Seizing state power in Nepal in 2006 would have been no guarantee of keeping it in 2007. If they had followed Mao’s teaching, the Nepalese Maoists would have tried to push the revolution into neighbouring countries. Indian and imperialist forces could well have responded by invading and forced the Maoists back into the countryside. Until socialism is dominant internationally, holding state power in any country is no guarantee that socialism will survive in this country. Radicals sense this and this may explain their continuing sympathy for the movements in India and the Philippines despite the despondency of some about their ‘failure’.

It might be that in the current phase revolution will spread around the world by the creation of red regions. This could weaken the power of the imperialists and prepare the way for the next phase-the seizure of state power in nation states.

Third Worldists, such as the Leading Light Communist Organisation, tend to discount this, arguing that even the poor in the First World countries are ‘labour aristocrats’. This might be overstating the case. In countries like Greece and Spain there is precious little in the way of welfare provision and the unemployed can end up destitute.

This is not true in all countries. For example, the poor of the United Kingdom benefit from the welfare state. They have much higher incomes than the poor of Bangladesh, for example. But the higher prices in the UK can make life very hard for the poor-high rents, heating bills and food bills are an increasing burden on their budgets. There is also the negative effect of living in a society where most people are affluent.

When most have cars then car use becomes a necessity in many areas, as facilities are planned with only the car user in mind and public transport becomes less and less available. When most people have internet access it starts to become essential for accessing many services. There is also the question of social norms. It is true that the single young person can ‘drop out of society’ and live on next to nothing if they want but this is not feasible when you have to bring up children who must be housed and clothed in the normal ‘acceptable’ style of society.

Some in the First World might be tempted by the prospect of revolution by a typical left program of guarantees of cheap social housing, cheap public transport, free healthcare, free education and full employment, as well as giving them the leading political role in society and power and control over their own lives.

However, in the current period, rising unemployment and increasing resistance from the labour aristocrats to welfare provision for the underprivileged are likely to create an increase in anger and desperation among the imperialist nation poor. Absolute lack of sympathy for their plight in mainstream society is likely to lead to an increasing sense of oppression. Might we see base areas in East London or Manchester as a result?

This might seem fanciful in an urban area but for a long period of time some nationalist areas of the Six Counties of Ireland were under the effective control of Irish Republicans, at least partially. One example of this was the fact that security forces were only able to operate in these areas with extreme difficulty due to popular opposition to the police and a desire for a different policing model.

But could such a situation happen outside of the unusual circumstances of the Six Counties?

It might be argued that these areas would just be isolated from wider society and would get crushed. But who can foretell so easily the course of a protracted struggle?

The position of the labour aristocracy is under threat from the impact of globalisation and the current economic crisis afflicting the world. The West continues with its pattern of declaring imperialist war after imperialist war-even rattling its sabre at China on occasion. It’s arrogance may yet lead to its defeat. Such outcomes could radically change the balance of forces in western societies. It might even be that revolutionaries learn to coordinate their efforts with those in other countries rather than dogmatically insisting that ‘making revolution in your own country' is the beginning and end of all strategic thinking.

None of this is to advocate the line of any particular party or to advocate any particular approach. However, I feel these comments may be of interest to those who are studying the current revolutionary events around the world and wish to gain some sense of where things may be heading. One thing is for certain-the imperialist governments attack the young and the poor at their peril. These governments may be surprised at the form which resistance will take.
Posted by nickglais on 10/24/2011 12:25:00 PM

'Unsurprisingly, not many have been tempted by this eclectic brew despite passionate advocacy by Avakian’s followers.'- Joseph Ball

Perhaps if they are not tempted by the 'New synthesis' they may be tempted by Chairman Avakian's musical projects, such as this 'rap'. ( use the word loosely):