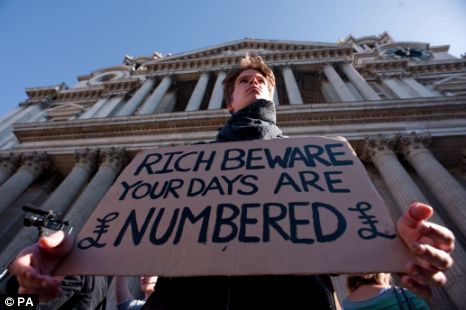 A protest camp, ostensibly against capitalism, involving hundreds of campers and thousands of visiting supporters lasting more than two weeks (and counting) in the City of London has to be welcomed by any revolutionary anti-capitalist, so I'll start with the positives.

In thirty years of campaigning against the system in its various manifestations I have never seen anything like this. A large community of revolutionaries organising, debating, protesting and promoting alternatives to capitalism. Most of the people involved are young and many are new to politics, some coming from the student protests of a few months back (soon to be revived), some from a variety of other campaigns. Camping out in London in October (albeit a mild October) pre-empts any question of how committed these people are. The response of tourists, passers by and others has been overwelmingly positive, suggesting the protests have struck a chord with much of the population at large; amidst headlines that bankers have had another 49% increase in their pay and bonuses. Even the mainstream media have been forced to take notice and there have been a series of fairly positive reports on television and in the local press about the camp.

The internationalism of the camp is another positive. The Occupy movement in London has given credit where its due as far as where the original inspiration has come from, with a number of references to the Egyptian Revolution including a large Egyptian flag flying above the camp. The campers and their supporters are a multi-cultural, multi-faith (Atheist, Christian, Pagan, Muslim, Sikh) mix.

One long-time revolutionary said to me on the first day of the camp 'the problem is there is no organisation'. By my second visit and on subsequent visits the fruits of organisation were everywhere; a kitchen, a cafe, a library, legal services, first aid centre, toilets, recycling centre (better than the one on my housing estate), for those of a religious persuasion there was a prayer and meditation tent. A 'Tent City University' had been organised with visiting academics from local colleges signing up to give lectures on economics and related subjects. A second satallite camp down the road in Finsbury Square had also been organised. To be fair what the comrade probably meant by 'no organisation' was that there was no political Organisation (with a capital 'O') at the head of the occupation. This is something us traditional leftists are having to get used to. The horizontal Facebook and Twitter based organisation of the student protests illustrated the arrival of a new form of political movement. The phenomenon is obviously here to stay and the way in which the established left (regardless of tradition) adapt to this will determine their ability to thrive at a time when anti-capitalism is once again a mainstream issue. My view is that the non-hierarchical forms of organisation bring with them advantages as well as disadvantages and I suspect the latter will come to the fore as the camp evolves.

The left are present at the protests but appear relatively marginal even though the main thrust of the movement is clearly leftist, albeit in a non-aligned and perhaps unfamiliar way. References to the Palstinian struggle, anti-war sentiment, Kurdish rights, opposition to student fees, anti-cuts stuff, environmentalism, feminism and a number of other traditionally left causes are represented on home-made and pre-printed posters which are plastered on any available space in the area around the camp. This said, the camp is a very mixed bag. Alongside the left are a plethora of other, less familiar ideas being promoted. Typically these do not see capitalism as such as being the problem, just one aspect of it; so a number of placards have attacked usury (I've seen these being carried by both self identifying Christians and Muslims wearing traditional dress) and there are banners and leaflets attacking fractional reserve banking. A seemingly large number of religious eccentrics have been drawn to the camp and another discernible trend is what is known as 'anti-politics'.

I do not share the optimism of some who declare that this is the start of a revolution, but I do believe, for those who dismiss the contradictory ideas which have come to the surface as 'alternatives' to the system, that this is in some ways what a revolution would look like. The idea that everyone (the 99%) would simply fall behind a single set of demands and the revolution would proceed in an orderly fashion from that point has always struck me as ridiculous.

Where the camp and related protests go from here, I wouldn't like to guess, their very nature is unpredictable, but for as long as they keep capitalism with all its faults in the spotlight, I wish them well.
Posted by nickglais on 10/30/2011 10:30:00 AM