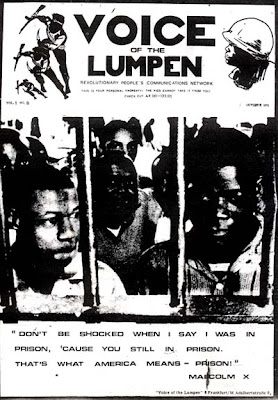 Democracy and Class Struggle is pleased to publish Comrade Harry's article on the Lumpenproletariat, Riots and Revolution.

Publication does not mean that the views of Democracy and Class Struggle are the same as Comrade Harry.

My commentary on the August urban disturbances in Britain attracted some responses with respect to the role of the lumpenproletariat. I suggested that criminal, lumpenproletarian elements were prominent in the rioting. The subsequent court appearances of persons arrested reveal that the great majority are people with previous criminal convictions. We need to examine the question of the lumpenproletariat more closely.

WHO ARE THE LUMPENPROLETARIAT?

He calls these people “this scum, offal, refuse of all classes”. Strong stuff!

1.This is a highly heterogenous category in terms of its members’ positions in the relations of production and in the ideological superstructure.

2.It is a very negative, moralistic, description.

Some of the above people are self-employed, members of the semi-proletariat; porters, organ-grinders, rag pickers, knife grinders and tinkers. Their economic position was precarious so at times some of them would spend periods as wage labourers and would be tempted to engage in petty thieving. In Britain and similar countries today there are many such semi-proletarians and they are concentrated in the deprived, “inner city” areas. They include asylum seekers and illegal immigrants whose legal position bars them from regular paid employment and so they have to hustle by street trading and casual, off the books, employment. Given their objective position, these people are potentially open to revolutionary ideas and actions.

Among others mentioned are vagabonds (vagrants), discharged soldiers, discharged jailbirds, mountebanks (includes mentally disturbed people) and beggars. These are people who have fallen out of and been thrown out of society, existing on the fringes of society, the drop-outs. They are a very recognizable category in Britain today. We encounter homeless people, former soldiers and prisoners begging. Quite often such people have mental problems and are heavily into drink and drugs. Their numbers are increasing as a result of rising unemployment and Government cuts in funding for state and voluntary services trying to help such people. These people are so downtrodden and screwed up that they do not really have the capacity for sustained political action.

Then there are the criminal elements: swindlers, lazzaroni (scoundrels), pickpockets, tricksters (con men), gamblers, maquereaus (pimps), brothel keepers. These certainly exist in poor, deprived urban areas in Britain . These people oppress and exploit the poor semi-proletariat and the drop-outs. They are definitely an enemy of the people at large.

Finally there are the literati (men of letters). Marx also uses the term la boheme (bohemians) to refer to all the types he mentions. More typically and specifically this term describes people consciously pursuing alternative life styles, particularly ones with some artistic content. In some deprived areas in Britain today there are clusters of such people. Some of them are educated people who have failed to establish themselves in regular, secure employment. Many get by on state welfare benefits. They tend to reject and be hostile to the bourgeois social order and some of them do embrace radical and revolutionary perspectives. Indeed, in so far as there is any visible oppositional political presence in these areas it consists of people from this category. Many of these people are of middle strata origin and so could be said to be “adventurous offshoots of the bourgeoisie”.

These different sections of what Marx calls the proletariat are not hermetically sealed from each other. Individuals may move between the groups. For example unemployed casual workers may engage in some petty crime such as burglary. Some of the bohemians can end up as homeless beggars as a result of excessive use of drink and drugs or themselves become drug dealers to fund their habit. Even so the elements Marx identified as lumpenproletarian are significantly different from each other and it can be questioned just how useful the term lumpenproletariat is for rigorous analysis of the revolutionary potentialities of these different people.

CAN THE LUMPENPROLETARIAT BE REVOLUTIONARY?

Mikhail Bakunin, one of the founding fathers of anarchism, considered that the mainstream of the working class had become fully incorporated into capitalist society and thus could not develop a revolutionary consciousness. In his view it was those elements on the fringe of and outside of capitalist society – the lumpenproletariat - who had revolutionary potential because they have nothing to lose and everything to gain. This view of the lumpenproletariat is still held by many anarchists today who were quick to hail the August riots as a social rebellion.

Comrade Ben Hu draws attention to Mao’s views on the lumpenproletariat which were more positive than those of Marx. In his Analysis of the Classes in Chinese Society Mao refers to “the fairly large lumpen-proletariat, made up of peasants who have lost their land and handicraftsmen who cannot get work. They lead the most precarious existence of all. …they have their secret societies, which were originally their mutual aid organizations for political and economic struggle, for instance, the Triad Society … . Brave fighters but apt to be destructive, they can become a revolutionary force if given proper guidance.”

In 1926 when Mao made his analysis China was still a predominantly feudal society. There was a limited amount of arable land and the Chinese peasantry did not practice primogeniture whereby all of a family’s land is inherited by the eldest son and the other sons had to leave the home farm and fend for themselves. Instead a family’s land was inherited equally by all of the sons of a peasant so people often inherited small plots which could not sustain them. This generated large numbers of landless, destitute peasants, perhaps ten percent of the population. They became landless labourers, beggars, vagrants, prostitutes, thieves, soldiers and bandits. The Chinese referred to this situation as the “sink of death”.

As Ben Hu points out, the first Chinese Red Army had a large number of people of this kind, “soldiers, bandits, robbers, beggars and prostitutes” as Mao referred to them. Indeed their commander was Chu Teh, a former warlord and opium addict. But not all of them turned out to be very reliable. Bandits are a feature of traditional, pre-capitalist societies. As E.J. Hobsbawn has argued, bandits are different from criminals in industrial capitalist societies. They are social outcasts who resort to robbery as a means of survival. This is not to deny that they can be very cruel to the ordinary peasants as in the case of the murderous Madhesi Tigers in Nepal today.

Mao also mentions peasant secret societies such as the Triads in China . These were originally defensive organizations to struggle against oppressive and exploitative landlords. Another well known example is the Mafia in Sicily . However when such societies transfer into advanced capitalist societies they tend to become purely criminal organizations with the case of the Mafia in the USA . In Britain today the Triads are very much alive, are heavily involved in drug dealing and are noted for the extreme violence which they employ in pursuit of their objectives.

In the nineteen sixties in America Huey Newton, one of the founders of the Black Panther Party, saw revolutionary potentialities in the black lumpenproletariat. He thought that as capitalism based on advanced technology developed it would bring about more under and unemployed people. These downwardly mobile people had the potential for revolutionary action provided they were recruited and trained by revolutionary organizations such as the Black Panthers. Huey was influenced by the example of Malcolm X who had been a thief and drug addict but became transformed into a major, radical leader of black people in America . Newton himself had an impressive criminal record. From the nineteen sixties onwards a culture of black radicalism has become established in American jails. The boxer Mike Tyson emerged from doing time with a large tattoo of Chairman Mao on his shoulder. Mike’s subsequent behaviour suggests that his ideological remoulding had been less than complete.

Experience in a number of countries suggests that the revolutionary potentialities of the lumpenproletariat are limited. It is certainly the case that committed revolutionaries have emerged from their ranks but these tend to be unusual, exceptional persons such as Chu The and Huey Newton and perhaps Comrade Otto who has been a drug dealer. In the main the lumpenproletariat are rather reactionary and are not the people communists should be focusing upon. On the contrary, if we praise these people, especially the criminal ones, then we are likely to alienate ourselves from the great mass of the working class and middle strata.

1.“Lumpenproletariat” is a vague concept and lumps together rather different categories of people. Communists should be careful to specify which type of people they are talking about.

2.It was criminal elements who played a prominent role in the riots in Britain during August 2011 although other sections of the ‘lumpenproletariat’ were involved as well as people from other class locations. There is a clear contrast between the damage to property and people in the August riots in Britain and the anti-capitalist rioting in Rome on 15th. October. The former was not politically motivated whereas the latter clearly was.

3.Communists should not engage in wishful thinking and self-deception by imagining outbreaks of urban vandalism and looting to be expressions of political revolt.

4.We should not dissipate limited personnel and resources on trying to win over the lumpenproletariat for revolution. Rather we should be striving to reach out to the broad sections of the working class, especially the more deprived ones, as well as the lower sections of the middle strata.

Why is literati listed alongside all those other people is something I can't quite get. Even if what he means is actually "Bohemian people" it still seems to be way far off, because in essence Bohemian artists are very different from all the other classes. They are actually living a very respectable and fascinating and also totally harmless, even very conducive life in relation with the society. Would you give me a little bit of an further explanation on this? Thanks a lot in advance!

Lumpen and proud. I guarantee my desire for revolution is more than yours. capitalism made my family this way for generations. limited resources mean limited ways to climb out without proper aid from programs over alienation being blacklisted or imprisoned