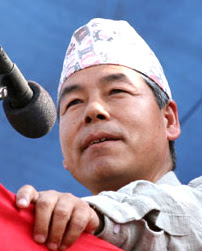 Kathmandu, 25 October: Standing committee member of UCPN-Maoist Dev Gurung has said that people’s movement is going to be initiated against BIPPA, a traitorous treaty signed by the party vice chairman and Prime Minister Baburam Bhattarai. Speaking in an interaction programme organized by Revolutionary Movement Nepal in Jansanchar abhiyan Club Kathmandu, Gurung said BIPPA has accepted the hegemony of comprador capitalism by replacing the national capitalism. The agreement is against the interest of national economy.

Gurung, in the programme, said that it is the continuation of traitorous 4-point agreement committed for the formation of the government of rightist wing.