160,000 Calls to Governor Brown: A Phone Call for every California Prisoner 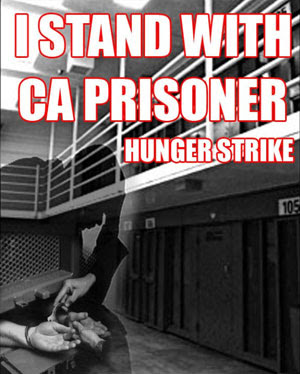 With the hunger strike reaching its third week, the medical conditions of hunger strikers are getting worse by the day. We need to work together to effectively pressure CA Governor Jerry Brown to intervene in the CDCR’s handling of the strike. It’s up to us to make sure the prisoners’ five core demands are implemented immediately and in good faith.

We know this is an ambitious goal, and we need your help forwarding this call out to everyone you know! Please let us know if you can organize a community call-in event near you and we will publicize it on this website. Email us at prisonerhungerstrikesolidarity[at]wordpress.com

Support the Prisoners in Winning their Demands!

Solidarity with ALL Prisoners!

“Hi my name is _________. I’m calling about the statewide prisoner hunger strike that resumed on Sept 26th. I support the prisoners & their reasonable “five core demands.” I am alarmed by the CDCR’s refusal to implement these demands and by your refusal to intervene as the hunger strikers’ medical conditions are rapidly deteriorating. I urge you to make sure the demands are implemented for all SHU-status prisoners in CA immediately and in good faith before anyone dies. I also urge you to lift the CDCR’s ban on lawyers from the prisoners’ mediation team, and ensure the CDCR ceases all retaliation on the hunger strikers. Thank you.”

The US imprisons more than 2.5 million people in prisons, jails, juvenile facilities & detention centers, far more than any other country. California imprisons 160,000 of those people in its state prison system alone. Solitary confinement is a key piece of this gigantic crisis. Conditions in California’s Security Housing Units & Administrative Segregation show just how brutal and inhumane the system is at its core.
Posted by nickglais on 10/13/2011 12:32:00 PM