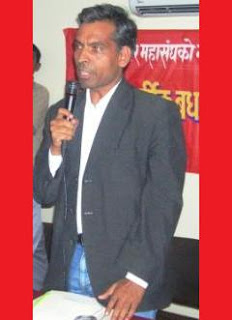 Surkhet, 5 October:  Leaders on wednesday have stressed the remark of Defense Minister Sarad Singh Bhandari, was against national integration.

Addressing a political programme organized by UCPN-Maoist at Babiyachour in West Surkhet, they  traced out the hidden objectives behind his remarks and said that it could be the symbol of Sikkimitization.

Political beuro member of UCPN-Maoist Dharmendra Bastola ‘Kanchan’ said that they would take an actual party decision about the regrouping of People liberation Army PLA and Intergration’s modality.

He urged that there weren’t any party decision to hand over the keys of arms containers to the Special Committee.

“The four points deal between Madesi parties and UCPN Maoist, hand over the keys of arms,democratic republic and returning of land and property aren’t formal party decision, we said that there should be alternative way out to resolve it.” He added “We are for peace and constitution with  national integration because its question has been in the top priority.”

“As no one can live without water, a true Nepali cannot live without national intregration.” He further added, ” As Party Chairman Puspa Kamal Dahal ‘Prachand’ had opted open arena to resolve the current crisis, we also have been compelled to take the disputes to street so as to aware public about national capitulation.”

He added that ‘note of dissent’ could be the better formula to resolve the crises but according to  five point agreements within the party to settle disputes about party line, they have been to the streets.
Krishna Prashad Dhamala ‘Gambhir” , the party In charge of Surkhet UCPN Maoist has said that the remark of Bhandati had come with the grand design to spilt national integration of Nepal.

“It cannot be his tongue slip.” He also said, “It should be boycotted agitating in the support of People so people and party cadres should be ready to wage against anti national movement .”

He urged that according to the four point deal, Nepal would be no more Nepal and it would be next new state of India just like Sikkim.