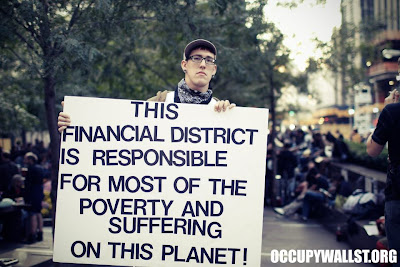 If the Occupy Wall Street Movement listens to its supporter critics then it will generate a dialectic of success. The views in this article are those of Comrade Tucker and not those of Democracy and Class Struggle.

The people's movement grows every week, the number of participants peaking on the weekends. At the same time, the movement’s largest organization weakens, rendering the movement vulnerable to being co-opted by those who are better organized.

As of October 8, the New York City General Assembly, the purportedly democratic body of Occupy Wall Street, barely functions as a decision-making mechanism. The NYC-GA has been reduced to a “people’s microphone” for public announcements of the decisions made by “working groups,” decisions which are also posted on public bulletin boards and on the internet. So why go through all the verbal strain? The NYC-GA is one of the main attractions of the Occupy Wall Street spectacle.

And what a spectacle it is! Hourly marches; slogan chanting; free food; celebrity cameos; literature tables; the people's microphone; the people’s library; signs and banners trumpeting everything from the end of racism to the second coming of Christ; all to the ceaseless beating of a hundred drums. A tourist unable to read the signs or understand the chants might think that the Occupiers’ main concern is a lack of public festivals, not that our society subjugates the needs of the many to the whims of the few.

As I pointed out in "American Autumn Part One," the New York City General Assembly is structurally incapable of dealing with multitudes of people with myriad political agendas. The consensus method used by Occupy Wall Street circumvents this diversity by atomizing the movement into tiny groups and friendship circles that ostensibly agree on everything—or at least agree to comply with the desires of the most charismatic, well-connected group members. There are few well-known historical examples of an influential organization utilizing the consensus method. Even a relatively small, unified group of people wields more power, in the long run, than a massive, unorganized movement.

A democratic General Assembly would be the most just way to accommodate diversity while maintaining unity. In the absence of this, the competing organizations set to dictate the avowedly leaderless movement’s policies and goals are as follows:

Because it is virtually impossible for the General Assembly—which consists of hundreds, sometimes thousands of people—to reach a consensus, everything has been delegated from day one to smaller “working groups.” Most of the hardcore occupiers—those who have spent multiple days and nights in the park—belong to one or more working group.

Unfortunately, these working groups also use the consensus model. On Saturday, October 8, I spoke with a member of the Press Working Group. He said that, with twenty to thirty people, the working groups were becoming too big and were finding it difficult to forge consensus. A group that has trouble coordinating the actions of thirty people is unlikely to provide the model for an alternative society, or even influence highly structured institutions like Bank of America—which has over a quarter million employees—and the US government. . The operations of these establishments, however, might be temporarily disrupted by the mobilization of millions of unorganized people performing simple acts in unison, like marching.

The marches are completely symbolic, calculated to garner the most attention possible for the least amount of work and thought afforded. The clearest example of the Direct Action Committee's modus operandi is the fiasco at the Brooklyn Bridge. On October 1, The Direct Action Committee led seven-hundred marchers onto the roadway of the Brooklyn Bridge. Shortly after reaching the roadway, the marchers were stopped by the NYPD. A police officer with a megaphone shouted to the leaders of the march that, “if you refuse to leave, you will be placed under arrest.” His voice was easily audible to the march’s leaders, even over the chants of “Take the bridge! Take the bridge!”

According to a witness who saw the events from the bridge’s walkway—and confirmed by this police video: http://www.youtube.com/nypd#p/a/u/1/BYfti1PeDmA—the leaders of the march did not solicit a group decision on whether or not to continue the march in the face of this threat. In fact, the march’s leaders did not even exercise their human microphone to inform the marchers that their arrest was imminent. Instead, the leaders changed the chant to, “Show me what democracy looks like! This is what democracy looks like!” and led the march onto the bridge’s roadway, allowing the police to carry out what looked like—judging from the dozens of buses from Riker’s Island—a preplanned mass arrest, one of the largest in American history.

This was a poor decision for several reasons. First, this action exposed the marchers to potentially serious physical danger. Although the NYPD exercised uncharacteristic restraint, the safety of the marchers was left to the discretion and caprice of the individual officers—not to mention the additional risks that go with occupying a bridge. Second, it subjected everyone involved, including those who did not self-identify as “arrestable,” to the criminal justice system. Third, it sent a message that Occupy Wall Street’s leaders—predominantly middle-class white men—are not sensitive to the challenges that involuntary arrest poses to a significant portion of the 99%: those with young children, unsympathetic employers, questionable immigration status, arrest warrants, or a reasonable fear of the police. Finally, the strategic occupation of the oppressive forces represented by the Brooklyn Bridge proved mostly to annoy middle-class inter-borough commuters.

This action did result in generating more attention and greater interest in the movement. For all its faults, the Direct Action Committee’s mobilization of the populous is more participatory than the progressive movement that elected Obama. In 2008, most progressives seemed to believe that America’s representational democracy could be reformed from the inside, through the election of the right people. Now these same progressives are thoroughly disillusioned by our nation’s politics and strive to control their collective destiny through united action. Every day the Occupy Wall Street movement continues, more people dream of a radically different world and make the social networks necessary—if not sufficient—to create it.


If the Occupy Wall Street movement fails to transform these networks into participatory democratic structures that can challenge the hierarchal institutions that led us into financial crises and endless wars, people will likely settle with voting for the “lesser of two evils” every couple of years, an act that bears a greater resemblance to democracy than much of what goes on at Occupy Wall Street.

Many people only began to take Occupy Wall Street seriously when the labor unions joined the movement. Labor unions control the machines and tools that are modern society’s vital organs. Every day, labor unions make the City run smoothly; and on any day, they can choose to stop. This power—kinetic and potential—makes labor organized in its current form capable of raising the standard of living for “the 99%.”

American labor unions are organized similarly to bourgeois parties and corporations. Laborers elect union officials, who monopolize the organization’s administrative life. Part of this administrative work entails giving orders to the laborers, who do the work that gives the raw material its social value. At the end of the day, the laborers have the fruits of their labor taken from them and divided primarily among the company’s owners, secondly among the union leadership, and lastly back among themselves.

If Occupy Wall Street is ever to create a world free from oppression—instead of merely mitigating the pain of the oppressed—radical elements within the labor unions must cooperate with radical elements within Occupy Wall Street and form the democratic organizations that are necessary to bring about an ever more participatory, dialogic, democratic, egalitarian society.

This theory is bolstered by Mayor Bloomberg’s tacit support of Occupy Wall Street, and President Obama’s recent acknowledgement of the “broad-based frustration about how our financial system works.” Rather than proposing a plan to end capitalism, Obama proposed “getting back to old-fashioned American values,” like “put(ting) in place financial rules that protect the American people.” During his speech he offered no criticisms of Occupy Wall Street, but did lambaste the Republicans for halting the progress of the Dodd-Frank Act.

Whatever their rationale, the Democrats will most likely wait to see how winter deals with the American Autumn. If Occupy Wall Street can resolve its structural shortcomings and last through the winter without its core members succumbing to frostbite, the Democrats may realize they’ve been playing with fire.
Posted by nickglais on 10/16/2011 09:05:00 AM