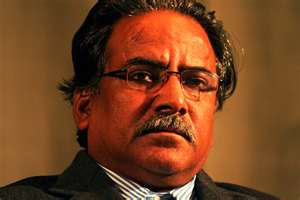 CHITWAN, Oct 15: UCPN (Maoist) Chairman Prachanda has for the first time admitted before the Maoist cadres that the establishment of new-democracy in the country is not possible.

“Things have undergone a sea change since the launch of the people´s war in 1996. We therefore have to adopt the policy of peace and constitution as per the changed context,”

a participant quoted Prachanda has telling the cadres loyal to him at a closed door gathering at Global Hotel, Bharatpur, Chitwan.

“If any of the comrades refuse to acknowledge this reality and insist on going for a revolt, they may choose to quit the party.”

Earlier, Prachanda had described the party´s current policy just as a tactical line in the fight for further achievements. In the past, he had assured the cadres that the party would establish a new democracy in the long run.

Only party´s Vice-chairman Dr Baburam Bhattarai had been saying that the establishment of new democracy wasn´t possible under the present circumstances. Bhattarai had advocated for economic revolution to pave the way for socialism. Prachanda's  latest remarks have made it clear that he has now accepted Bhattari´s policy.

Democracy and Class Struggle  source for this report is Republica a source we do not trust but the comments of Prachanda reported are consistent with his political line.
Posted by nickglais on 10/20/2011 12:14:00 PM

Actually,it is said that decemocracy declares all the value and norms.