SCROLL DOWN TO READ BOOK IN PDF FORMAT 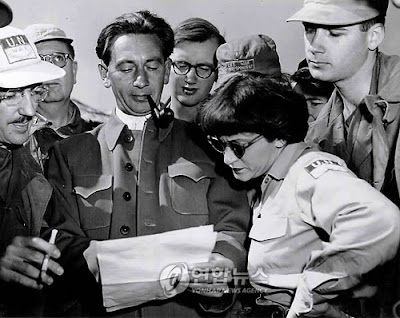 Alan Winnington with his trademark pipe

Alan Winnington from 1950, he was one of only two Western journalists (the other was Australian) to observe Korean War from the North Korean side. Given that there were 300 correspondents from 19 nations in Korea, all one the Southern side, this put him in a singular important position. His factual reporting of the experimental use by the Americans of bacteriological warfare outraged that country’s leadership which then brought pressure on the UK to act against one of its own citizens.

In an atmosphere of outrage, he was accused by western media and politicians of assisting in what was claimed to be the new trick allegedly being carried out by the North Koreans of `brainwashing’ prisoners of war. Although, posterity seems to agree that the Korean version of what was already a highly developed and successful branch of the art of torture within the CIA, of leading a political discussion about the merits of Kim Il Sung, was more off-putting than influencing. This writer, in his youth, actually met a Scotsman – not a Communist - who had been a POW in Korea and had been subjected to attempts at what might at a stretch be called indoctrination but was not in the least resentful about the experience of what would be deemed re-education by the Vietnamese liberation struggle in similar circumstances.

It seems that Winnington’s crime was to, as part of his reporting duties, observe such a meeting of British servicemen in a North Korean POW camp, where a discussion about the nature and aims of the war had been led by a Korean political education officer. This was stretched to allegation that he had observed the beating of POWs and translated during their improper interrogation by the North Korean military. None of this appears to be remotely true and no retrospective evidence to back up the injustice perpetrated on Winnington has ever appeared.

Even so, he was called a traitor by newspapers and, in the security of parliament, politicians threatened him with prosecution if he were to enter Britain. Then, fearful that the Communist Party might call their bluff and recall Winnington so that he could challenge his accusers in open court, in 1954, at the end of the Korean War, when Winnington expected to be able to travel home, the British Government simply refused to renew his passport and supply a new one on the expiry of his outdated one.

Thus, he was stranded abroad, unable to travel except within the socialist bloc, and lived in exile for the next 20 years. The decision to ban him from receiving a passport was not lifted until 1968.

He had in any case relocated to Berlin in 1960 and, even when his passport was restored in a different international climate, Winnington still spent his remaining years in the, perhaps, more congenial surroundings of the German Democratic Republic, or `East Germany’. Apart from his diplomatic and war journalism, he was a prolific writer; many of his books were translated into German. He produced nine novels, six of which were in the crime and detective genre, two children’s books and four factual books on travel and anthropology and  China, as well of course  political pamphlets and the like. His biography was finished by his widow and a colleague and published posthumously after he died on 26th November 1983 aged 73.