China: Xi Jinping urges calm over North Korea and parties should meet each other halfway 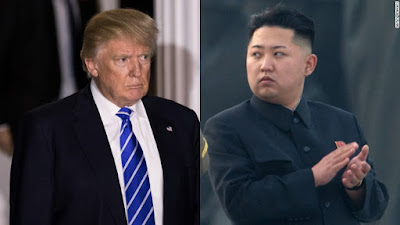 Democracy and Class Struggle says that Trump  is boxing himself into a corner on North Korea as he is no diplomat neither is Rex Tillerson - Xi Jingping clearly is trying to restrain Trump but with limited success - the  most dangerous time is still ahead.


Chinese President Xi Jinping and his US counterpart Donald Trump on Monday discussed bilateral ties and the situation on the Korean Peninsula over the phone, promising close contact to allow for the prompt exchange of views on major issues of mutual concern.

It was the second phone conversation between the presidents since Xi visited Trump in Florida on April 6.

Xi noted that if the parties shoulder their responsibilities and meet each other halfway, they can solve North Korea's nuclear issue and achieve denuclearization, according to Xinhua.

Tensions on the Korean Peninsula are mounting, with South Korean and US media reporting that North Korea is preparing its sixth nuclear test on Tuesday, the 85th anniversary of the founding of its military.

North Korea has reportedly evacuated citizens living near the Punggye-ri nuclear test site, where it conducted the fifth nuclear test in September 2016.

South Korea's Yonhap News Agency reported Sunday that the UN Security Council will hold meetings on the North Korean nuclear issue on Friday, which may be North Korea's excuse for its latest provocation.

Amid tensions, life in Chinese cities bordering North Korea has been going on as normal, though residents expressed concerns about what will happen next on the peninsula.

A resident of Yanji, Northeast China's Jilin Province, surnamed Guo told the Global Times that she is worried about reports of upcoming nuclear tests.

Yanji is the capital of the Yanbian Korean Autonomous Prefecture and is located just 10 kilometers from the border of China and North Korea.

"We felt the earth shake during North Korea's last nuclear test, and it plans to soon test again? Seniors and children will panic," said Guo.

The Punggye-ri nuclear test site is roughly 100 kilometers from Chinese border cities, including Yanji and Tumen in Jilin Province, which experienced seismic activity during the fifth test.

A primary school in Yanji evacuated its students after the September 2016 test, news portal sohu.com reported.

A resident of Dandong, Northeast China's Liaoning Province, which is also near the North Korean border, told the Global Times that he fears Mount Changbai volcano may erupt due to man-made earthquakes across border.

The mountain straddles the border between the countries.

The resident, surnamed Zhang, also said that if the situation deteriorates, there may be a flood of North Korean refugees to China.

"They [the North Koreans] are now short of everything - from food to energy as well as technology. How will we find out if their nuclear test pollutes the air, soil and especially groundwater?" Zhang said.

Li Guowei, 54, a resident in Yanji, told the Global Times that "this is not the first time we have heard this news and it won't be the last. Our lives have to go on."

Li said that despite the trouble North Korea has created, he has some sympathy for the North Korean people who want to protect their country, as "their hands are tied by reality."

"They have a strong backbone but this cannot help them develop the country's economy," said Li.

The Global Times reporter saw a group of North Koreans checking into a hotel in Yanji, and a hotel employee confirmed with the Global Times that there have been delegations from North Korea visiting the region regularly for business or to see relatives in China.

Yanbian has a large population of ethnic Koreans. About 70 percent of Jilin's 1 million ethnic Koreans live there. It is also a gathering place for South Korean students and businesses