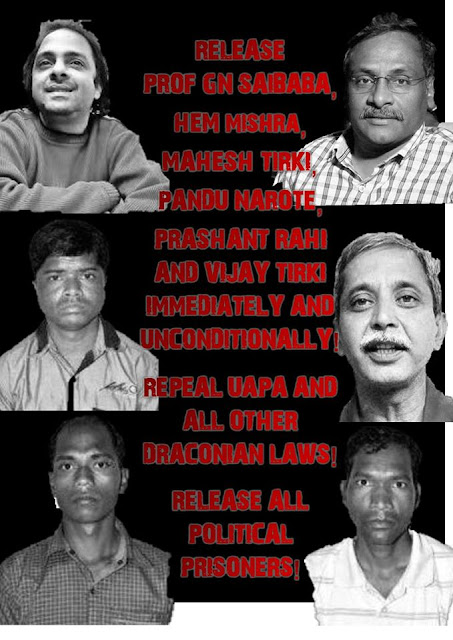 The Committee for the Defence and Release of Dr GN Saibaba expresses its shock and dismay at the judgment delivered on March 7, 2017, by the Court of Sessions Judge at Gadchiroli District (Maharashtra) in the case of State vs Mahesh Tirki and others convicting all the six accused under various sections of the Unlawful Activities (Prevention) Act, 1967 and 120-B of the Indian Penal Code. While five of the accused – Mahesh Tirki, Pandu Narote, Hem Mishra, Prashant Rahi, and GN Saibaba – were awarded the maximum sentence under the relevant provisions (i.e., imprisonment for life), one accused – Vijay Tirki – was awarded a ten year sentence of rigorous imprisonment.

Although a conviction by the trial court is but the first ordeal in the long winding legal process, the conviction itself comes as a bolt from the blue for all those who have been following the developments of the case, which was built on flimsy grounds, bolstered with concocted evidence and tutored witnesses, and burdened with shoddy investigation and procedural lapses. It was only to be expected that the whole edifice would come crumbling down. However, the sessions judge thought otherwise.

Many legal minds have already analysed the judgments and pointed out the glaring loopholes and legal infirmities. The Committee has also come out with its own critique of the judgment. The most worrisome aspect of the judgment is that it sends the ominous message that there is no space for dissent in our times. The judgment repeatedly points out how wrong it was for Dr GN Saibaba and others to hold certain views that were in opposition to that of the State and the dominant groups. It is ironic that even while holding that these six people are so dangerous that they should be incarcerated for a major part of their lives, the 827 page judgment fails to point out even a single instance of violence that these people have been conspirators in or lent logistic support to. It is a pity that the judiciary that should buttress the rights and liberties of the citizens become not just a silent spectator of the infringement of the rights, but become an active collaborator in the ushering in of a totalitarian regime.

Although all the six who have been convicted are facing hardships and fighting inclement weather and adverse conditions in the prison cell, Dr GN Saibaba’s case needs a special mention not only due to his 90% disability, but also due to his failing health conditions. In fact, just before the judgment was delivered, Saibaba was hospitalized and was undergoing treatment for gall bladder stones. Apart from the chronic issues with his heart and high blood pressure, Saibaba was also suffering from acute gastric condition resulting in cardiac condition along with palpitations.

It was indeed the prolonged incarceration in the anda cell as an under-trial that worsened his condition to this level. Now, even before he could fully recuperate the judgment has been delivered, and we fear that given the dismal track record of the Nagpur jail authorities in caring for his health, his life is in real danger. In an utterly callous manner, the trial court refused to pass any order instructing the jail authorities to give adequate medical care to Saibaba, in spite of the fact that it is on record how inhumanly the jail authorities had treated him earlier. The High Court and the Supreme Court had even censored the jail authorities and given strict instruction to give him proper medical care.

In connection with this glaring miscarriage of justice and against the convictions of GN Saibaba, Mahesh Tirki, Pandu Narote, Hem Mishra, Prashant Rahi and Vijay Tirki, a press conference was organised on 20th April 2017 in Press Club of India. Various academic luminaries and intellectuals along with family members of GN Saibaba and Hem Mishra addressed the gathering. Stressing the clear lack of evidence of any form of association or involvement in violence against all six of the convicted, complete reliance on electronic evidence by the Sessions Court Judge,

Dr Hany Babu introduced the press conference by laying out bare the peculiar nature of the case where the sessions judgement himself stopped short of exterminating them by declaring that his hands were tied by law which did not permit him to deliver a judgement beyond life imprisonment. Bypassing all loopholes and contrasting statements provided by the police, they have been punished for merely upholding a thought .In such an instance of gross violation of justice,

Dr Hany Babu emphasised that the judgement is not just a conviction of Prof Saibaba and five others, but it puts all democratic values on trial. It is an attack on all sections of intellectuals, teachers and students who espouse and cherish the value of ideas, progressive thought and dissent. Hence, there is a need for a cross-section of teachers and students to come together to speak up against the stifling of voices in universities and space across the country.

The chairperson of the Committee for the Defence and Release of Dr. GN Saibaba, Prof Haragopal addressed the gathering by reminding everyone that the case of Prof Saibaba was similar to the trial of Dr. Binayak Sen. Further, he insisted that this case is not confined to only the six convicted individuals, but democratic values have been put at stake. Adding that people were persecuted for their ideas in the medieval times, and that such a judgement in a modern democratic framework echoes something extremely troubling.

He urged that this judgement reflects democracy on death bed in which our ideas and thoughts will be persecuted and stifled. Quoting the Kothari Commission, he emphasised that the function of a university is to critically assess the manner in which society lives. As professors and teachers, it is these values and opinions about the nature of society and life that are discussed in classrooms. But this judgement strikes at the very core of this right to exchange ideas and values. Hence, he appealed to the press and all who had gathered to come together to mobilise against the increasing instances of stifling of dissent and curbing of democratic values. Adding that a judge should always be driven by constitutional laws, he said that role of the judiciary is to check the functioning of the executive and ensure the executive does not become despotic.

But, if the judiciary itself starts bypassing its role, then it points towards a dying democracy. Addressing the press, another member of the Defence Committee and editor of Mainstream Weekly, Sumit Chakraborty, shared his thoughts on earlier judgements delivered by the Supreme Court which declares that no individual can be punished for mere association with an outlawed organisation. He concluded by highlighting the need to mobilise and come together in huge numbers to speak about our right to expression and the need to galvanise public opinion about the travesty of justice that clearly emanates from this judgement.

The next speaker, Pankaj Tyagi, was one of the lawyers who helped draft the comprehensive critique of the judgement. He elaborated on loopholes and the weakness of the prosecution’s arguments. He further explained the manner in which police and the state had already tailored and planned a case and conviction since the first day of abduction and arrest of three individuals, Hem, Mahesh and Pandu in August 2013. Alongside, the critique of the judgement titled, When the Prosecution’s Case Becomes the Onus of the Judge, was released as a booklet in front of the press.

Hem Mishra’s father addressed the gathering by speaking about his experience with the case for the last three years. Questioning the very nature of this democracy, he asserted that in this “democracy”, freedom is only for the ruling classes and the marginalised people and those who stand with their struggles are being persecuted. He further appealed to all progressive and democratic sections to mobilise among the people to raise concerns about the political climate in the country where all forms of dissent are being criminalised.

Another member of the committee, Prof N Sachin directed attention towards the conditions in Delhi University where there has been a conspiracy of silence with respect to Prof Saibaba’s case which raises questions about the deteriorating political climate all around us. DUTA President and member of Defence Committee, Prof Nandita Narain, expressed her concerns about the deteriorating health conditions of Prof Saibaba and the urgent need for medical treatment. Stressing on Prof Saibaba’s witch hunt within Delhi University, she further spoke about the increasing legitimisation of rigwinght forces in university campuses.

What cannot be overlooked is the alarming disparity between various judgements that have come in recent times where those against whom there are clear evidences of instigating mob violence, engineering riots and blasts were acquitted by higher courts. The same judiciary has now punished people with life imprisonment for merely upholding an idea. Challenging the judgement, she stated that the life imprisonment of a 90% disabled person is a clear attempt to murder that person by the ruling political dispensation. Finally, Vasantha, Prof Saibaba’s partner spoke about the conditions in prison which has adversely impacted Saibaba’s health even during his previous incarceration. Despite that, the judge and jail officials have not taken his medical emergency into consideration.

Explaining the bizarre manner in which the judgement unravelled after a lengthy trial riddled with loopholes, unsealed recovery, and misrepresentation of facts by police, she argued that the judgement seems to have held Prof Saibaba and others responsible for the lack of “development” in Maharashtra! She spoke at length about what this development means and raised questions regarding the nature of such “development” and who it is for,

She added that this development is anti-people and the most marginalised sections of adivasis have organised against this form of anti-people development. It is evident that the government is hence targeting all those individuals, activists and intellectuals who are allying with people’s demands and against the present policy of development. She emphasised that it is precisely because of Prof Saibaba’s unrelenting stand with peoples’ movements and voicing opinions against Operation Green Hunt that he along with others have been convicted.

The Committee calls upon all democratic minded individuals and organisations to join hands and fight against injustice meted out to Dr GN Saibaba and the five others who are convicted. It should be noted that one person, Prashant Rahi is a journalist, another (Hem Mishra) a student, and three others are adivasis. The legal process will definitely take its due course.

In fact, the appeal against the Sessions Court judgement has already been filed in the Nagpur Bench of the Bombay High Court and the records have been called from the trial court. Apart from pursuing the legal struggle, the Committee proposes to hold public meetings and other programmes and solicit your active participation and active cooperation in building a public opinion against such gross violation of our fundamental freedoms. In standing for the demand for acquittal of all the six we ensure our fundamental freedoms as well!