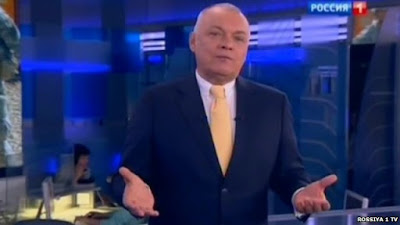 On Sunday, his first broadcast since Rex Tillerson's maiden visit to Moscow as U.S. secretary of state, Kiselyov, who once praised Trump for his "independence" from the U.S. political establishment, removed the proverbial gloves.

"The world is a hair's breadth from nuclear war," said Kiselyov. "War can break out as a result of confrontation between two personalities; Donald Trump and Kim Jong-Un. Both are dangerous, but who is more dangerous? Trump is."

Kiselyov went on to say that Trump was "more impulsive and unpredictable" than the North Korean and to say both men shared some of the same negative traits: "Limited international experience, unpredictability, and a readiness to go to war."

Democracy and Class Struggle pointed out the unstable character of Trump for over a year when Russia was in the grip of Trump Euphoria.

Russia is still acting belatedly to the internal political consequences of Trump on the Russian political scene.

On the International Scene they are catching up post the Syria strike.