Syria: Was It Really “A Chemical Weapons Attack”? Memorandum to US President from Veteran Intelligence Professionals for Sanity 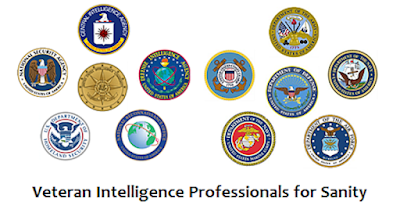 MEMORANDUM FOR: The President

SUBJECT: Syria: Was It Really “A Chemical Weapons Attack”?

1 – We write to give you an unambiguous warning of the threat of armed hostilities with Russia – with the risk of escalation to nuclear war. The threat has grown after the cruise missile attack on Syria in retaliation for what you claimed was a “chemical weapons attack” on April 4 on Syrian civilians in southern Idlib Province.

2 – Our U.S. Army contacts in the area have told us this is not what happened. There was no Syrian “chemical weapons attack.” Instead, a Syrian aircraft bombed an al-Qaeda-in-Syria ammunition depot that turned out to be full of noxious chemicals and a strong wind blew the chemical-laden cloud over a nearby village where many consequently died.

3 – This is what the Russians and Syrians have been saying and – more important –what they appear to believe happened.

4 – Do we conclude that the White House has been giving our generals dictation; that they are mouthing what they have been told to say?

5 – After Putin persuaded Assad in 2013 to give up his chemical weapons, the U.S. Army destroyed 600 metric tons of Syria’s CW stockpile in just six weeks. The mandate of the U.N.’s Organization for the Prohibition of Chemical Weapons (OPCW-UN) was to ensure that all were destroyed – like the mandate for the U.N. inspectors for Iraq regarding WMD. The U.N. inspectors’ findings on WMD were the truth. Rumsfeld and his generals lied and this seems to be happening again. The stakes are even higher now; the importance of a relationship of trust with Russia’s leaders cannot be overstated.

6 – In September 2013, after Putin persuaded Assad to relinquish his chemical weapons (giving Obama a way out of a tough dilemma), the Russian President wrote an op-ed for the New York Times in which he said: “My working and personal relationship with President Obama is marked by growing trust. I appreciate this.”

7 – Three-plus years later, on April 4, 2017, Russian Prime Minister Medvedev spoke of “absolute mistrust,” which he characterized as “sad for our now completely ruined relations [but] good news for terrorists.” Not only sad, in our view, but totally unnecessary – worse still, dangerous.

8 – With Moscow’s cancellation of the agreement to de-conflict flight activity over Syria, the clock has been turned back six months to the situation last September/October when 11 months of tough negotiation brought a ceasefire agreement. U.S. Air Force attacks on fixed Syrian army positions on Sept. 17, 2016, killing about 70 and wounding another 100, scuttled the fledgling ceasefire agreement approved by Obama and Putin a week before. Trust evaporated.

9 – On Sept 26, 2016, Foreign Minister Lavrov lamented: “My good friend John Kerry … is under fierce criticism from the US military machine, [which] apparently does not really listen to the Commander in Chief.” Lavrov criticized JCS Chairman Joseph Dunford for telling Congress that he opposed sharing intelligence with Russia on Syria, “after the [ceasefire] agreement, concluded on direct orders of Russian President Vladimir Putin and US President Barack Obama, had stipulated that the two sides would share intelligence. … It is difficult to work with such partners. …”

10 – On Oct. 1, 2016, Russia’s Foreign Ministry spokesperson Maria Zakharova warned, “If the US launches a direct aggression against Damascus and the Syrian Army, it would cause a terrible, tectonic shift not only in the country, but in the entire region.”

11 – On Oct 6, 2016, Russian defense spokesman Maj. Gen. Igor Konashenkov cautioned that Russia was prepared to shoot down unidentified aircraft – including any stealth aircraft – over Syria. Konashenkov made a point of adding that Russian air defenses “will not have time to identify the origin” of the aircraft.

12 – On Oct 27, 2016, Putin publicly lamented, “My personal agreements with the President of the United States have not produced results,” and complained about “people in Washington ready to do everything possible to prevent these agreements from being implemented in practice.” Referring to Syria, Putin decried the lack of a “common front against terrorism after such lengthy negotiations, enormous effort, and difficult compromises.”

13 – Thus, the unnecessarily precarious state into which U.S.-Russian relations have now sunk – from “growing trust” to “absolute mistrust.” To be sure, many welcome the high tension, which – admittedly – is super for the arms business.

14 – We believe it of transcendent importance to prevent relations with Russia from falling into a state of complete disrepair. Secretary Tillerson’s visit to Moscow this week offers an opportunity to stanch the damage, but there is also a danger that it could increase the acrimony – particularly if Secretary Tillerson is not familiar with the brief history set down above.

15 – Surely it is time to deal with Russia on the basis of facts, not allegations based largely on dubious evidence – from “social media,” for example. While many would view this time of high tension as ruling out a summit, we suggest the opposite may be true. You might consider instructing Secretary Tillerson to begin arrangements for an early summit with President Putin.

A handful of CIA veterans established VIPS in January 2003 after concluding that Dick Cheney and Donald Rumsfeld had ordered our former colleagues to manufacture intelligence to “justify” an unnecessary war with Iraq. At the time we chose to assume that President George W. Bush was not fully aware of this.

We issued our first Memorandum for the President on the afternoon of Feb. 5, 2003, after Colin Powell’s ill-begotten speech at the United Nations. Addressing President Bush, we closed with these words:

No one has a corner on the truth; nor do we harbor illusions that our analysis is “irrefutable” or “undeniable” [adjectives Powell applied to his charges against Saddam Hussein]. But after watching Secretary Powell today, we are convinced that you would be well served if you widened the discussion … beyond the circle of those advisers clearly bent on a war for which we see no compelling reason and from which we believe the unintended consequences are likely to be catastrophic.

Respectfully, we offer the same advice to you, President Trump.

For the Steering Group, Veteran Intelligence Professionals for Sanity