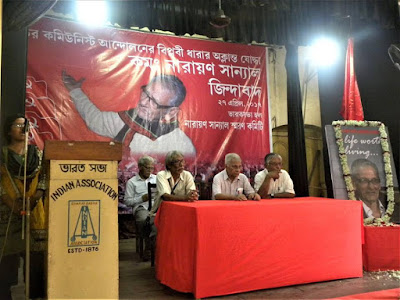 ILLUMINATE THE RED FLAME IGNITED AT HOMAGE MEETING HELD IN BHARAT SABHA HALL IN KOLKATA ON APRIL 27TH FOR LATE C.P.I.(MAOIST) CENTRAL
COMMITEE MEMBER NARAYAN SANYAL OR BIJOY DA. IT PROVES THAT THE INSPITE OF FACING SUCH GRAVE FASCIST ASSAULTS THE LIGHT OF MAOISM IS TILL SHIMMERING IN THE 50TH YEAR OF NAXALBARI.VERY SAD THE HOMAGE MEETING FOR DEPARTED C.P.I.(MAOIST) LEADER NARAYAN SANYAL GOT NO PRESS COVERAGE.I WAS PRIVILEGED TO ATTEND IT. AND PAY A TRIBUTE.

On 27th April a condolence meeting was held for late C.P.I.(Maoist) leader Narayan Sanyal or Bijoyda .Around 100 people attended the meeting form all walks of life which was heartening.I almost got the overtones that the bourgeois press boycotted this meeting as slandering Maoism is part of it's agenda.

However around 100 people participated from a great number of streams.

The meeting was chaired by Purnendu Mukherjee aided by Tilak Das Gupta and Gour Chakravarty who also spoke.Tilka Das gupta was formal associated with Sanyal in the Party Unity group from 1978-91 and thus his talk had great significance.Purnendu Mukherje is an ailing C.P.I(Maoist) leader released on bail and now convening joint revolutionary fronts playing the principal role.Gour chakravarty is a veteran maoist revolutinary.

At the beginning all the participants observed few minutes of silence paying homage and later everyone placed a garland over the phopto of comrade Sanyal raising fists with red salutes.

I was particularly touched by the speeches of Varavara Rao ,Darshan Pal and Vernon Gonzalves.Varavara Rao ,leaderr of Virasam and Revolutionary democratic front elaborated that throughout his life Narayan Sanyal stood up for the unity of the revolutionary party and displayed qualties of humility as well as affection. 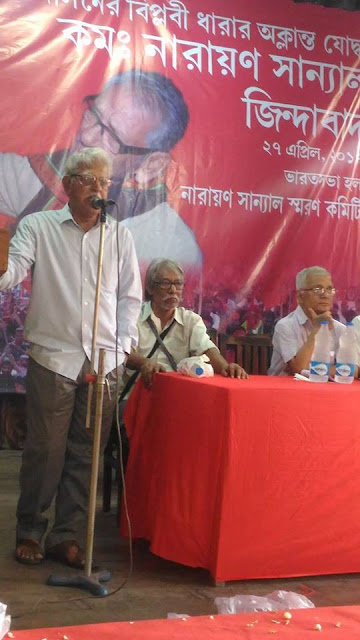 He never hesitated to share his experiences Comrade Varavara recounted the history of the Virasma,which was founded in the era when the C.P.I.(M.L.) led by Charu Mazumdar disallowed forming of mass organizations and later the work of the Radical youth league and students Union in building agrarian revolutionary struggles to facilitate peoples war..

V.V.spoke about India being fascist just like countries were in the 1930's and how the maoist led adivasi mass organization had more strength than even any bourgeois mass organization incorporating over one lakh members.

He spoke about how thousands of maoist sympathiser were still languishing in prisons but still how Dandkaranya was a historic landmark.

In the dark hour of fascism a leader like Bijoy was like a light extinguishing the forces of darkness.V.V.also stated that Bijoy's work was a testimony of howt he unity of a the Maoist party of 3 factions was not unprincipled.Vernon Gonzalves,is a former revolutionary political prisoners who was framed as aterrorist and jailed for 4 years from 2007-11.Vernon spoke about how much he shared with Bijoyda ..

He gave an example of the time of the seminar on the nationality question where Sanyal's initiated had great significance.Vernon spoke about how transparent Bijoyda was inspite of having important differences at different junctures he would with great patience listen to the point of view of another comrade .He was also very meticulous in writing notes till his last days.

What was above all his greatest quality was that even after suffering from illness he persisted with his work like a boulder resisting a gale.Darshan Pal spoke about his impact on the movement in Punjab in terms of socioeconomic analysis and his great contribution in fostering the unity of C.P.I.(M.L.) in 1998 and C.P.I..Maoist) in 2004,inspite of having important differences..Darshan Pal also spoke about the progessive movements of the

All India Peoples Resistance Forum and how Narayan Sanyal influenced them.He praised Sanyal;'s support of nationality struggles.Darshan Pal also spoke about how Bijoyda till 1992 felt that the principal contradiction was between the comprador bureaucratic bourgeoisie and the masses and not feudalism.

At the conclusion I gave a brief speech on how comrade Bijoy da till his last breadth upheld the cutting edge of the party and protracted peoples war .I summed up  his role  in upholding the practice or contribution of the erstwhile C.P.I.(M.L.) Peoples War group and later  erstwhile Maoist Commuist Centre n the unity conferences of 1998 and 2004.which was the turning point in the history of Indian Communist Movement .

Historically it would be worthwhile to produce a polemic on the various 2 line struggles waged within the C.P.I.(M.L.) Party Unity in theory and practice ,particularly on practice of armed struggle and peasant mass organizations.Quite a few left PU after 1987 on difference pf question of principal contraction and practice of armed squad resistance.

As they spoke in Bengali I could not understand what Tilak Raj Gupta said but I was impressed that this ex-party Unity comrade emerged on the scene to pay a tribute.Till 1991 he was with the Party Unity but left because of differences.Still he upheld the great role of Bijoy and the work of the Maoist party.

The leader of Liberation paid Sanyal a complement and of New Democracy avoiding criticisms which was progressive for general unity.Inspite of important differences so many comrades coming together had great significance proving a revolutionary camp still exists to sow the seeds of a revolutionary uprising,
Posted by nickglais on 4/29/2017 02:49:00 AM