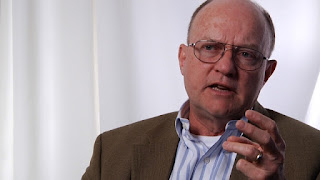 “Assad’s military has gained a decisive advantage over the rebels and he had just scored a major diplomatic victory with the Trump administration’s announcement that the U.S. was no longer seeking ‘regime change’ in Syria.

The savvy Assad would know that a chemical weapon attack now would likely result in U.S. retaliation and jeopardize the gains that his military has achieved with Russian and Iranian help. (…) But logic and respect for facts no longer prevail inside Official Washington, nor inside the mainstream U.S. news media.”


Colonel Lawrence Wilkerson — Former Chief of Staff to Colin Powell — does not believe the official narrative of the ‘Syrian chemical attack’. Former CIA officer Philip Giraldi agrees and describes the story as nothing short of a “sham”. Follow us on Twitter: @INTEL_TODAY

Last Thursday, Secretary of State Rex Tillerson claimed the U.S. Intelligence Community had assessed with a “high degree of confidence” that the Syrian government forces had unleashed a toxic chemical bomb against innocent civilians in Khan Sheikhoun in Syria’s Idlib Governate.

However, it is now quite obvious that “a number of intelligence sources have made contradictory assessments, saying the preponderance of evidence suggests that Al Qaeda-affiliated rebels were at fault, either by orchestrating an intentional release of a chemical agent as a provocation or by possessing containers of poison gas that ruptured during a conventional bombing raid.” [Robert Parry — Trump’s ‘Wag the Dog’ Moment]

According to Colonel Lawrence Wilkerson’s well informed sources, the explanation presented by the Russians is the most likely scenario. Wilkerson also confirmed that the intelligence on this ISIS depot had been shared prior to the strike with both US and Russian Military.

“In fact most of my sources are telling me — including members of the team that monitor global chemical weapons, including people in Syria, including people in the US Intelligence community — that what most likely happened (and this intelligence was shared with the US by Russia in accordance with the de-conflicting agreement) is that they hit a warehouse  that they intended to hit and had told both sides, Russia and the US, that they were going to hit.

This is a serious air force, of course. And this warehouse was alleged to have ISIS supply in it and indeed it probably did. And some of these supplies were precursors for chemicals (or possibly an alternative they were phosphates for fertilizing)… Conventional bombs hit the warehouse and the wind dispersed these ingredients and killed some people.”
Posted by nickglais on 4/12/2017 02:10:00 AM