India : 300 Maoists for Social Justice Against the Unjust Indian State 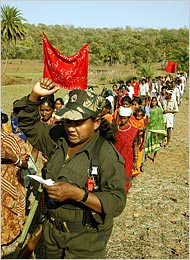 Democracy and Class Struggle says the overwhelming military/police forces of the Indian State cannot defeat the Naxalite idea of social justice and it NEVER will.

The idea of Revolutionary Socialism cannot be uprooted from India - it produces new generations of revolutionaries daily who will succeed over time.

"As the backup team advanced, he spotted the two women counting mangoes on a tree, after which they created a sound by beating two sticks that they carried. “This is a system of alerting Maoists about the presence of security forces by their informers”,..

Monday’s deadly Naxal attack in Chhattisgarh’s Sukma district that claimed the lives of 25 CRPF personnel has forced the Centre to review its anti-Naxal strategy, with home minister Rajnath Singh convening a high-level meeting of all Maoist-infested states on May 8.

Sources said the attack by around 300 Naxals has rattled the government and the meeting was likely to discuss a tactical shift in future anti-Naxal operations, with a focus on greater involvement by state police forces.

Expressing concern over the role of the local police in tackling Naxal activities, the home minister, who visited Chhattisgarh on Tuesday, said the government has taken the incident as a “challenge” and that “the sacrifice of the jawans (CRPF personnel) will not go in vain”. In Raipur, he said the Naxal strategy would be reviewed and, if required, it would be revisited. The minister has also directed senior officials, including acting CRPF chief Sudeep Lakhtakia and MHA security adviser K Vijay Kumar, to stay put in Chhattisgarh to monitor the situation and coordinate the targeted operations against the Naxals.

The sources claimed that in the Burkapal incident, there was “no intelligence or assistance from the local police” to the CRPF and no information was given to the force on the massive mobilisation of Naxal cadre in the region.

“We never received any cooperation from local villagers despite the fact that I treat them regularly and saved many lives”, said Manoj Kumar, a medical worker in the Burkapal CRPF camp, giving first-aid to injured jawans. Kumar recalled how a young woman in a red sari had surfaced near the camp in the morning just before jawans from the camp left for an operation to sanitise the nearby areas to pave way for resumption of construction of a road along with a bridge.

“I have been posted in the camp for the past four years. I know people in the nearby villages since I provide them medical treatment. I got curious about the mysterious woman since I have never seen her before. I enquired about her when two other women appeared at the camp later. But they misled me, saying she was a newlyed woman of the village. Later, I found from other villagers that the mysterious woman didn’t belong to the village.”

As the backup team advanced, he spotted the two women counting mangoes on a tree, after which they created a sound by beating two sticks that they carried. “This is a system of alerting Maoists about the presence of security forces by their informers”, he said.

A senior security official said: “One needs to look at the role of the local police as they are totally dependent on the CRPF without providing any support or backup to them. What states need to realise is that Central police forces are deployed from outside and have no knowledge or information about the local networks of informers or terrain which makes the task for them more difficult. This makes the role of the state police in providing local intelligence more important, which is not happening. In the Burkapal incident, the local police didn’t accompany the CRPF team.”

As many as 99 jawans of the CRPF’s 74th battalion had left the Burkapal camp around 6 am Monday to sanitise the construction site. The Naxal attack came at about 12.55 pm, when the jawans were preparing for lunch.

“The ambush site chosen was a very small area surrounded by dense forests from where Maoists launched the attack. The small open area did not give enough scope to the jawans to manoeuvre to undertake retaliation,” said IGP (Bastar Range) Vivekanand Sinha, who visited the ambush site for the second day Tuesday.

The ambush site had shoes and torn clothes of slain jawans scattered around, water bottles hit by bullets, unused arrow bombs, empty cartridges of automatic weapons and mortars. There were reports that Naxals had also mutilated the bodies of some of those killed, but officials were tightlipped about it.

Twenty weapons, including 16 AK-47s, five fitted with under-barrel grenade launchers (UBGL), three Insas rifles and LMGs were looted from the slain jawans. About 2,800 rounds of AK-47 ammo, 600 rounds of Insas and 20 grenades, besides bulletproof jackets, wireless sets, and binoculars were also taken away.

An initial probe by the security agencies has revealed that besides lack of intelligence, another reason for the high casualty of CRPF personnel was that Naxals used tribal villagers as human shields, which restricted retaliatory action by the security forces, besides the fact that the Naxals occupied vantage positions and cornered the CRPF personnel from three sides, thus blocking any possible escape routes.

The security agencies have identified the mastermind behind the Burkapal incident as Hidma, a top Naxal commander, who heads the 1st battalion of the Naxal People’s Libe-ration Guerrilla Army (PLGA). One of the most wanted Naxal commanders, Hidma is also reported to have been behind the attack on CRPF jawans last month, in which 12 of them were killed.

“What is surprising is that the local intelligence unit of the state police had no information about the presence of a top Naxal commander like Hidma in the region. More so as Naxals carry out most major operations against the security forces in the summer,” another official noted.

The home ministry has out the possibility of deploying the Army to tackle the Naxal menace, saying it was an internal security issue. This, incidentally, has been the Centre’s position even under the UPA government, even though Air Force helicopters were used for logistical aid like transporting injured personnel and airdropping food, medicines and other essential supplies for them.