INDIA: CONDEMN THE FASCIST ATTACK BY POLICE FORCE IN CHANDIGARH ON STUDENT COMMUNITY WAGING DEMOCRATIC STRUGGLE IN NO UNCERTAIN TERMS BY HARSH THAKOR 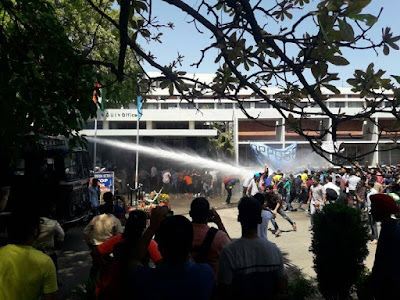 ALL SECTION SHOULD VOCIFEROUSLY RAISE THEIR VOICE IN EVERY NOOK AND CORNER OF THE COUNTRY.

IT REFLECTS THE MORAL NATURE OF OUR SO CALLED DEMOCRACY WHICH BANGS EVERY POSSIBLE NAIL IN A COFFIN TO CRUSH THE GENUINE STRUGGLES OF ALL SECTIONS.STUDENTS SHOULD ORGANIZE PROTEST BOYCOTTS IN ALL CAMPUSES IN SOLIDARITY.

It is an inspiration and illustration for the student community worldwide,educating them about the repressive nature of bourgeois democratic state towards them,who can never genuinely solve their problems

It is also a lesson on how the current globalization and liberalization policies endorse attacks on the most peaceful student agitations.

The pretensions of our so called democracy have been exposed to the fullest who cannot tolerate even a peaceful protest.

The Punjab student community has heroically withstood the police barricades like a boulder withstanding a gale.It has encompassed many campuses in the state reminiscent of  many streams converging into a river

It 's flame has been illuminated by students in campuses of other cities like Benares, Allahabad, Hyderabad and Delhi.

We must salute the meticulous work of the Punjab Students Union more than any organization in this struggle who resisted and mobilzed at every juncture.Significantly sections of workers and peasants have openly come out in support of the agitation.them Brutal lathicharge on students protesting against fee hike in front of VC office....

Several students are injured severely....
Some have been arrested by police... 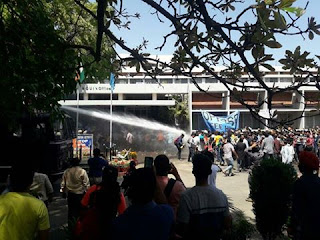 Today Students responding to the call of UNIVERSITY CLOSED given by Joint Students Action Committee (JSAC) against Fee Hike boycotted the classes and gathered at Vice Chancellor Office. First Students shut down the StuC and then Library. The Vice Chancellor ignored the students protests and tried to handle it with police administration. The students were demanding that Vice Chancellor would come out and accepted the demands. Then the Police started mishandling the students. Ignoring the students genuine demands the police started lathicharged in which some girls students got head injury. The students continued with their demand tried to move forward then the police used water canons to disperse the students. But when students didn't step back then frustrated DSP ordered to use the tear gas shells. Afterwards students retaliated with stone pelting. The police continued with their brutal actions of lathicharge and droping tear gas shells. The Police also opened firing. The injured students are admitted at GH- 16.

The Police chased the students up to campus Gurdawara Sahib where they arrested more than 50 students. The Police first tried to curb the students protest and now trying to defame the students and organisations that we started violence first which is totally false allegation said SFS president Daman Preet. When students protested against the authorities for genuine demands then the role of police is totally undemocratic thats why JSAC also demanded to restrict the entry of police in the campus. Earlier also authorties tried to supress the students protest with police brutality in 2014. The Struggle against Fee Hike would continue with few other demands-

1. The arrested students should be released immediately.
2 The action should be taken against university authorities, DSP and chandigarh police who used undemocratic method in response to students protest Tortured by cops, students tell court
Judicial Magistrate orders medical examination of 18 seriously injured by board of doctors
Sandeep Rana Tribune News Service Chandigarh, April 12

A day after students were arrested during a violent protest against the fee hike at Panjab University, they alleged torture at the hands of the police in a jam-packed local court today as the Judge passed directions to the police.

During their cross-examination before Judicial Magistrate (First Class) Jagmeet Singh, a majority of the 53 students alleged that they were beaten up with belts and sticks, punched, abused and caste-based and obscene remarks were passed against them in the lock-up by the police. Several students also alleged that their medical examination was a mere formality.

Taking cognisance of their statements, the Judge ordered the police to get 18 severely injured students medically examined by a board of doctors at the GMSH, Sector 16, and submit a report on or before April 26. He further directed them to also submit a report to the UT SSP so that an inquiry could be conducted, if required.

Earlier, the Judge asked the students to speak the truth without fear and listened to their statements carefully. One of the students, Satya Prakash, alleged that after they were arrested, the police slapped them and hit them with sticks. Buta Singh alleged that caste-based remarks were passed against him as he belonged to the SC category. “They thrashed us for two-three minutes, then stopped and then again thrashed us. This continued for around four hours,” he said.

Another student, Meharpreet, alleged, “They dragged me outside the gurdwara by my neck and punched me 15 to 20 times... Later, they took me away in a police vehicle to the Sector 11 police station while thrashing me throughout the route... They also broke my spectacles.”

Yet another student, Rajat, said he was thrashed with a belt and a stick was smashed on his feet after the arrest. Appearing after him before the Judge, Amandeep Singh alleged that they were made to lie on the floor and smashed with sticks on the feet at the Sector 24 police post. Others alleged that they were not given painkillers at the hospital and were not medically examined properly.

hey also showed injuries on the hands and head. There were some others who said they were innocent and were arrested from hostels and the library and had nothing to do with the protest.
Injuries at time of protest:

The public prosecutor told the Judge that the allegations were not true as all injuries were of the time when they were involved in a violent protest. It was further stated that the incident occurred after the protesters pelted the police with stones.

The court was jam-packed as District Bar Association members and a few senior advocates gathered in and outside the courtroom. The proceedings continued for about an hour and a half as two students were brought in the court at a time for recording their statements.

One of the girls alleged that it was a nightmare spending the night at the police station as she was not provided sanitary napkins when she asked for these. Another girl alleged that the police passed obscene remarks against her. Meanwhile, all students, who were ferried to the court in three buses, were sent to 14-day judicial remand.