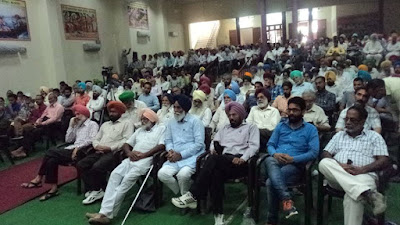 SALUTE CONFERENCE OF AFDR IN BARNALA ON APRIL 8TH  AND DEMOCRATIC FRONT AGINST OPERATION GREEN HUNT ON APRIL 12TH CONTINUING THE LEGACY OF THE DEMOCRATIC RIGHTS MOVEMENT NOT ONLY OF PUNJAB BUT THE ENTIRE NATION.

EVEN IF NOT HUGE IN NUMBERS QUALITATIVELY IT WAS OF GREAT SIGNIFICANCE IN RAISING DEMOCRATIC CONSCIOUSNESS..IT SOWS THE SEEDS FOR A STRONG DEMOCRATIC RIGHTS MOVEMENT TO PROTECT THE HARD WON RIGHTS AND THE DAY TO DAY ORGANIZED STRUGGLES OF THE TOILING MASSES TO EMANCIPATE THEMSELVES FROM THE CLUTCHES OF OPRESSION.EVEN IF ABOUT 500 PEOPLE ASSEMBLED IT SOWS THE SEEDS FOR A SPARK TURNING INTO A PRIARIE FIRE AND IS AN INSPIRATION TO ALL CRUSADERS FOR REVOLUTIONARY DEMOCRACY.

IT REPRESENTS THE DEMOCRATIC ASPIRATIONS OF PEOPLE ALL OVER THE NATION AGAINST THE TYRANNY OF FASCISM.GREAT TO SEE SUCH RE-ACTIVATION BY AFDR BRINGING BACK MEMORIES OF THE ORGANIZED MOVEMENT IN THE 1970'S AND 80'S.THE STRUGGLE FOR THE LIFTING OF LIFE SENTENCE ON SAIBABA AND THE MARUTI WORKESR IS A PART OF THE STRUGGLE OF THE INDIAN PEOPLE AS A WHOLE TO FREE THEMSELVES FROM THE SHACKLES OF BARBARIC OPRESSION.

SUCH CONVENTIONS ARE AN IMPORTANT BASE FOR CREATING A STRONG ORGANIZED MOVEMENT TO DEFEND THE RIGHT OF THE MASSES TO DEFEND REVOLUTIONARY STRUGGLES .A.F.D.R HAS CONTINUED THISLEGACY.THE TEMPO OF SUCH AN INTIATIVE BY AFDR IN BARNALA AND PUNJAB SHOULD ALWAYS NE MAINTAINED TAKING THE CIVIL LIBERTIES MOVEMENT TO A NEW HEIGHT BURNING THE FLAME OF RESISTANCE FOR EVER.

The Association for Democratic Rights Punjab staged a conference and rally constituting around 500 people condemning the life sentence on Saibaba and his 5 compatriots as well as that on the Maruti Suzuki workers.Gandhian activist Himanshu Kumar and Maruti union leader Ram Niwas mainly adressed the gathering.

Although a Gandhian Himanshu Kumar elaborated how the state was pardoning the siphoning of money by the multinationals who were looting the country but paying deaf ear to the poor peasants who are unable to pay back loans.

He explained the connection between the states support of corporate or MNC mining operations and supressing the movement of tribals in Chattisgarh.He felt is was absolutely hypocritical that India classes itself as the largest democracy as in reality it was virtually oposite.All the govt.policies in his view only favoured the rich .The B.J.P.virtually continued the legacy of the Congress in ruling and dividing through religion and diverting people from their real problems.

Himanshu Kumar also emphasized the important role the youth had to play in combating the opression and that they must be guided on the correct path.Significant that the 2 speakers who condemned the fascist repression were not in anyway connected with Maoist movement or ideology but still most perfectly elaborated the fascist nature of judgements.

The convention culminated into a strong march for about half and hour from the hall to Bhagt Singh statue in the street market area.Basically the event played an important role in raising the democratic consciousness of peole in te dark hour of fascism relating the relationship between socio-economic condition sand democratic rights

It revived memories of the organized democratic rights movement of AFDR in the 1970's and 80's defending the broad movements of the peasantry,students,workers and youth.

Even when the revolutionary movement is at it's absolute height there is need of a civil liberties organization to defend the rights of organizations to launch democratic struggles and combat state repression.It is an inspiration to the entire country is sowing the seeds  for resurrecting the Democratic rights movement.

Prominent activists participating were Parminder Singh,Swaranjeet Singh,A.K.Maleri,Amolak Singh ,Rajwinder,Kanwaljeet,Om Prakash,Kasturi,Pirthipal,Advocate Rajeev  ,Narbhinder and Buta Singh.4 days later on 12th April a conference and rally was staged by the Democrtaic front against Operation Green Hunt in Moga on the same issues. 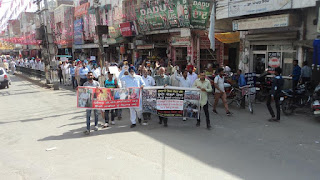 Again speeches and slogans were vociferously raised  revoking fascism.During the Morcha the street market area literally looked lit up with the torches of resistance..