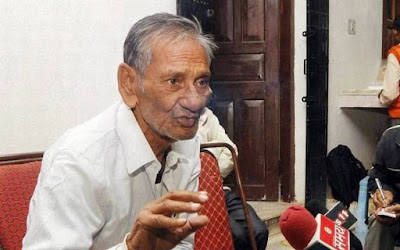 RED SALUTES TO IMMORTAL COMRADE NARAYAN SANYAL DIP OUR BLOOD IN MEMORY OF  MAOIST LEADER NARAYAN SANYAL WHO WAS A CRUSADER OF THE INVINCIBLE IDEOLOGY OF MAOISM TILL HIS LAST BREADTH.

MAY HIS SPIRIT BE RESSURECTED AND ILLUMINATED IN EVERY CORNER OF THE GLOBE. SANYAL SOWED THE SEEDS OF THE MAOIST MOVEMENT IN BIHAR AND BENGAL

AS LEADER OF PARTY UNITY GROUP AND WITH AN IRON SWORD DEFENDED MAOIST LINE OF PEOPLES WAR AGAINST OPPORTUNIST TRENDS.PLAYED MAJOR ROLE IN THE FORMATION OF C.P.I.(MAOIST) AND EARLIER MERGER OF PU AND PWG GROUPS INTO C.P.I.(M.L.).

HE TRAVERSED THE MOST TURBULENT WATERS AS A CRUSADER FOR THE MASS LINE SINCE THE EARLY 1970'S. AND PLAYED THE HIGHEST ROLE IN ENABLING C.P.I.(M.L.) PARTY UNITY IN TREADING THE MAOIST PATH.

Although ailing and in bed for a considerable period he never seized to exude the inextinguishable torch of Marxism-Leninism -Maoism.

Comrade Sanyal was a crusader and architect of the mass line and Maoist movement from the early 1970's.He struggle first against the left adventurist'annihilation ' line of Charu Mazumdar and later against Satyanaryan Singh's right deviation.

Later in the 1980's he played a pivotal role in defeating the rightist trend within the Party Unity Group and steered the organization to pursue the path of Protracted Peoples War.''

He fought tooth and nail against all comrades and trends who wished to pursue the parliamentary path or withdraw the armed squads in the 1987 Party Unity conference..

He  played an instrumental role in the rectification of the 'individual annihilation 'line through developing mass military line .

He also fostered the building of mass organizations like the peasant association and students and youth fronts.Examples are the Mazdoor Kisan Sangrami Samiti and Bharat Naujvan Sabha in Bihar and the Revolutionary Students Association in Bengal.

He always emphasized the importance of mass movements to substantiate the armed struggle and was greatly impressed by the developments in Andhra Pradesh developed by the Peoples War group.He also gave great encouragement to intellectuals to link with the movement.

What all cadres must wish is that his legacy will continue and new leaders will sprout up illuminating the torch comrade Sanyal lit.

Below is a report from Hindustan times Narayan Sanyal alias Bijoy-da, the Naxalite leader who joined Maoist politics in 1967 and played an instrumental role behind the formation of CPI(Maoist) in 2004, died in Kolkata on Monday.

He was 78 and suffering from multiple ailments, including cancer.

Sanyal was among the last links between the Charu Majumdar-led CPI(ML) – considered the father of leftwing insurgency in India – and its offshoot CPI(Maoist), which is perceived as India’s gravest internal security threat.

At the time of his arrest in December 2005 from Raipur in Chhattisgarh, Sanyal was a member of the banned CPI(Maoist)’s politburo, the highest decision-making body. He was released from jail in 2014 due to failing health and had been living in Kolkata since.

He was also known by the alias of Naveen Prasad.

“With the death of comrade Bijoy-da, the Indian revolution lost one of its most important leaders who was instrumental behind the resurgence of Naxalite politics after the setback of 1972,” said septuagenarian Purnendu Sekhar Mukherjee, who was a central committee member of the CPI(Maoist) at the time of his arrest in 2011 and is out on bail since 2015.

Sanyal, who was hardly photographed, had an unshakeable faith in armed struggle against the state.

Rights activists and Maoist sympathisers in Kolkata said the body will be kept at a mortuary for two days and the last rites would be performed on April 20.

“We expect activists and Naxal sympathisers from different parts of the country to arrive in Kolkata for paying him the last respect. That is why we will keep the body in the mortuary for two days,” said a former associate of Sanyal.

During an interaction with this correspondent about a year ago, Sanyal recalled how he got into the CPI(ML). He was initially associated with the MMG group (Man-Money-Gun), founded by Ananta Singh of Chhitagong armoury raid fame, until the farmers’ uprising erupted in Naxalbari in 1967.

He quit his job with a bank and plunged into the movement in Kolkata.

“In 1968, top Naxal leaders Saroj Dutta and Sushital Roychowdhury (both became politburo members of the CPI(ML) when the party was formed in 1969) had several rounds of discussion with me, following which I left for Bihar to organise the movement there,” Sanyal had said.

In Bihar, he worked under the leadership of Satya Narayan Singh, who was a politburo member of CPI(ML) and its Bihar unit chief.

However, when almost the entire Bihar state committee defected under Singh’s leadership in 1971 over differences with Charu Majumdar,

Sanyal took charge of the pro-Majumdar unit of CPI(ML) in Bihar and organised cadres in the Jehanabad-Palamou belt.

A meeting of Maoist leaders that took place in Kolkata in August 2016. But it did not carry the banner of any ultra Left group.

He was arrested in 1973, sent to Kolkata and was released in 1977 after the first Left Front government in West Bengal fulfilled its electoral promise of general amnesty for political prisoners.

“Even when in jail, a group of us had been discussing how to avoid the mistakes that led to the setback in 1972 and how to reorganise the movement. We contacted old comrades soon after coming out of jail and starting working on an evaluation of the first phase (1967-72), based on which the movement will be rebuilt,” Sanyal had earlier told HT.


In 1978, Sanyal and few others formed the outfit CPI(ML)(Party Unity) with the aim of uniting all ‘true revolutionary forces’. CPI(ML)(PU) went on to become a major Naxalite outfit active in Bihar, apart from CPI(ML)(Liberation) and Maoist Communist Centre (MCC), and engaged in violent caste wars with the private armies of upper caste landlords. Sanyal became its general secretary in 1987 and continued in this position until merging his outfit with the Andhra-based CPI(ML)(People’s War) in 1998.

Among other first generation Maoists who joined the movement during the second half of 1960s and made it to the top level of CPI(Maoist) in 2004, only three remain alive. Prashanta Bose, the number two in CPI(Maoist) is believed to be hiding in the forests of Jharkhand, while Purnendu Sekhar Mukherjee is out on bail and Amitabh Bagchi is in jail since 2009. Both of Bose and Mukherjee are suffering from various ailments.
Posted by nickglais on 4/18/2017 11:56:00 AM