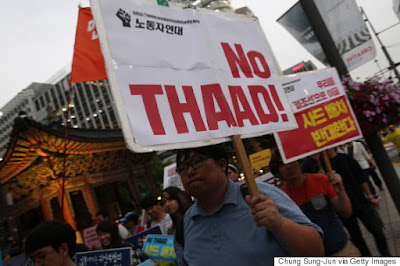 Democracy and Class Struggle says if history is a guide there will be tension between the failed Chinese wet/dry diplomats and the Chinese military over the THADD Deployment in South Korea.

President Xi Jingping as the Chairman of the Chinese Military Control Commission represents that contradiction between military and diplomacy - which he is increasingly finding difficult to bridge in the Trump Era.

Expect the Chinese Military to make its views more strongly in the Chinese State in view of the THADD provocation.

Beijing has long spoken out against THAAD over fears it will undermine its own deterrence capabilities.

A March editorial in the state-run Global Times newspaper said Washington should "pay the price" for the deployment of the system, which it said was "on China's front door."

However, the US insists the system is for purely defensive purposes, against any potential attacks from Pyongyang. US Admiral Harry Harris told Congress on Wednesday that it "poses no threat to China."

THAAD, which was moved onto a golf course in Seongji, North Gyeongsang Province, South Korea, on Tuesday, is designed to intercept short, medium, and intermediate-range ballistic missiles during their terminal flight phase.

It is equipped with long-range radar which can look 2000 miles into China and Russia.

The Chinese Defense Ministry's statements come as the US continues to urge Beijing to put pressure on North Korea, as China is the country's main economic lifeline.

Referring to the increased tensions between Washington and Pyongyang on Thursday, China said it approves of a recent statement by the Trump administration which said the White House is still "open to negotiations" to achieve stability and "peaceful denuclearization" on the Korean Peninsula.

When asked about such statements, Chinese Foreign Ministry spokesman Geng Shuang said Beijing had noted that many US officials had recently made similar remarks.

"We believe this message is positive and should be affirmed."

Earlier this week, China urged restraint from all sides of the conflict during a call with US President Donald Trump, whose administration continues to state that “all options are on the table” when it comes to North Korea.
Posted by nickglais on 4/27/2017 05:07:00 AM