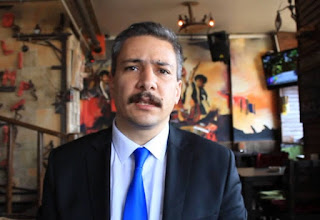 “Our vice Co-Chair Mr Alp Altinörs’ home was raided by police forces around 02:00 AM tonight and he was taken into police custody. We protest and condemn this clear act of aggression as a further instance of the campaign of repression on HDP and forces of democratic opposition,” the HDP said.

“Mr. Alt?nörs is being accused of participating in the funeral of HDP Tokat executive Mr. Zakir Karabulut who was one of the 102 citizens killed in the ISIS suicide bomb attack against a peace rally in Ankara on October 10, 2015,” the HDP leadership said in a statement.

“During the house-raid, the police have confiscated the reports published by HDP on the destruction in Sur and Cizre as evidence,” it said.

The Turkish government said it launched the largest operation against the Kurdistan Workers Party (PKK) and has suspended 11,285 teachers for alleged links to the PKK.

The Turkish Prime Minisiter Binali Yildirim said that an estimated 14,000 teachers have links to the PKK.

“HDP considers the unlawful police raid on Mr. Altinörs’ home and the confiscation of HDP’s official reports as alleged ‘evidence’ as state terror and we strongly condemn these acts and mentality,” the HDP said.

The HDP says the current actions by the Turkish government are a sign that the ruling Justice and Development Party (AKP) is now carrying out its own purge or coup, after a Turkish military coup failed on 15 July, 2016.

“The form of this raid and the detention of our party executive on an absurd and unlawful pretext is the most explicit manifestation of the “civilian” coup that is currently underway,” the HDP said.
“We invite the national and international public to respond urgently to this act of belligerence and express their reaction,” the HDP added.

Speaking to ARA News, Dr. Janroj Yilmaz Keles, a Research Fellow at Middlesex University, said that the Turkish government has used different means to have a hegemonic domination over the growing Kurdish politicisation and demand for more rights.

“On one hand, Turkish government attempted to use religion and financial resources to weaken the growing Kurdish popular movements. On the other hand, in order to maintain its hegemonic domination over the Kurds, the AKP [Justice and Development Party] government has looked for a consensual control over Kurds through establishing TRT 6 (rename TRT Kurdi) and also starting the “solution process” with the Kurdish political movement,” he said.

Keles pointed out that the Turkish government hoped to gain control over the Kurds in the negotiation process, but the HDP and the developments in the Kurdish areas of Syria stopped this plan.

“With the rise of the pro-Kurdish Party (HDP) in Turkey and the Kurdish political movement in Rojava [Syria’s Kurdish region] and its internationalisation and creating alternative policies and political structures, the AKP has understood that the Turkish state will not be able to have a consensual control over Kurds and will not be able to weaken the growing Kurdish influence in the region,” he told ARA News.

“What we are witnessing is that Turkish government uses its coercive power (airstrikes against the YPG [People’s Protection Units] and PKK, arrests of the Kurdish politicians, state of emergency bill) to prevent the growing influence of the Kurdish power,” he concluded.