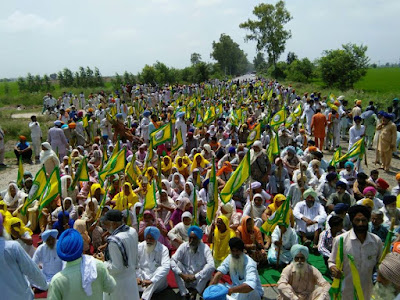 SALUTE THE HEROIC AND RESOLUTE RESISTANCE OF PEASANT ORGANIZATIONS AND CONDEMN THE STATE GOVT FOR SUPRESSING THE AGITATION.

MAY THE PEASANTS OF PUNJAB STAND LIKE A BOULDER AGAINST THE STRONGEST OF GALES AND CREATE THE IMPACT OF A TORRENT.

MAY THEY TURN A CANDLE LIGHT INTO A BONFIRE.TRIBUTE TO WORK OF ORGANIZED MOVEMENT.

NO BETTER ILLUSTRATION FOR HOW UNDEMOCRATICALLY PEOPLES MOVEMENTS ARE TRAMPLED UPON IN SUPRESSING OF CHANDIGARH PROTEST.


The true colours of the Punjab government is expressed in the manner in which they have arrested the leaders of peasant organizations of the landed peasantry.

It has deployed it's utmost energy in foiling the agitation of 7 peasant organizations in Chandigarh on September 5th.

Particularly forces of the youth of BKU(Ugarahan ) made meticulous preparations and youth rallies were stage all over Punjab.

It was also significant that so many peasant groups were jointly protesting.

All democrats must staunchly support the peasant organization sin defying the barricade in the venue in Chandigarh and the posts blocking their entry.

The B.K.U Ugrahan leaders are still optimistic in it's success.

The protest is a continuation of the 50 day protest in Bathinda which was eventually foiled and the districtwide 3 day stir at the end of July.

No organization in recent years has made such a contribution in democratic movement of Punjab as B.K.U(Ugrahan)Yesterday in almost all districts of Punjab protest actions were launched like wildfire.

It spoke volumes of the intensity of struggle and preparations of organized movement. tribune NEWS Chandigarh/Moga, Sept 3 Two days before the start of a “pakka morcha” (indefinite protest) in Chandigarh, the police started a statewide crackdown on the intervening night of Friday and Saturday and arrested more than 20 farmer leaders.

Seven farmer organisations had given a joint call to start the “pakka morcha” at Matka Chowk from Monday.

“Whatever repressive action the government may resort to, we will hold the protest,” said Sukhdev Singh Kokri, general secretary, BKU (Ugrahan).

The raids were conducted all over Punjab, but a majority of the leadership went underground as a precautionary measure. Kokri said leaders were arrested in Bathinda, Moga, Faridkot, Ludhiana and Patiala districts.

He claimed that those arrested included Shinder Singh Nathuwala, state president of the BKU (Krantikari); Satbir Singh, general secretary of the Kirti Kisan Union; Karamjit Singh Talwandi of the Kisan Sangharsh Committee; and Darshan Singh, district president of the Ludhiana unit of the BKU.

He said the police also scaled the walls of the houses of two farmer leaders — Kuldeep Kaur Kussa and Sukhdeep Kaur — in Bathinda to arrest them.

However, the protest by villagers preveted their arrest.

In Patiala, the police raided the residences of leaders of the BKU (Dakaunda) and arrested nine leaders. BKU (Dakaunda) state general secretary Jagmohan Singh condemned the action.
The organisations are demanding the waiver of private and government loans outstanding against farmers and labourers, Rs 5 lakh compensation to families of suicide victims and government job for one of their kin and new tubewell connections with the installation cost.

They are also demanding land ownership rights for cultivators. POLICE REPRESSION ON RALLY Farmer unions on September 5th announced that their protest would continue at about 16 places in the state after the Punjab Police prevented the protesters from reaching the state capital for launching a ‘pucca morcha’ (indefinite protest).

The unions claimed that about 600 members of various farmer organisations were arrested or rounded up in the police crackdown in various districts.

A joint front of seven organisations had given a call to begin an indefinite protest against the state government at Chandigarh’s Matka Chowk.

In a statement, Sukhdev Singh Kokri Kalan of the Bharatiya Kisan Union (Ugrahan) and Kanwalpreet Singh Pannu of Kisan Sangharsh Committee said, “The farmers will keep protesting. They will not return home.”

Criticising the cane charge on protesters in Moga district, the leaders alleged that at least 50 farmers were injured in the police action.

Meanwhile, at least 44 farmers were taken into custody by the Moga police from the Moga-Ludhiana national highway near new Chuhar Chak village when they were on the way to Chandigarh.

SSP Sneh Deep Sharma said all farmers belonged to various villages of Faridkot district. They were taken to the Mehna police station as a preventive measure.

Another group of farmers gathered at Kishanpura village to jointly leave for Chandigarh but the Moga police stopped them from moving out of the village.

Agitated over police action, the farmers blocked the Ferozepur-Ludhiana road in the village and raised slogans against the SAD-BJP government.

The villagers, on the persuasion of the district administration, lifted the blockade in the evening and sat inside a village gurdwara to protest.
Posted by nickglais on 9/06/2016 02:40:00 AM