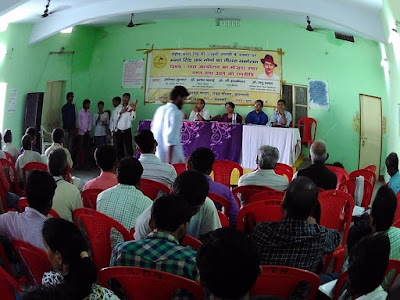 MAY IT CARRY THE SCARED TORCH OF STUDENTS MARTYRS .

MAY THEY SOW THE SEEDS FOR A LOTUS TO BLOOM.

They inspire the student community of India.

Privileged to be present in gathering and rally where I witnessed the great fighting spirit of comrades illuminating the flame of shaheed Bhagat Singh.

They are sowing the seeds for emerging red roses to bloom.

Comrades expresses the rage of a torrent interrupting at the end of the rally like a peaceful stream turning into a turbulent river, It was a real privilege to participate in this conference.

The theme of the sammelan was on students movements of today and how to combat the repression on them.

The author spent some time interviewing Ritesh Vidhyarti .The activists in their review made a self -critical assesment stating that they should work more to the day to day burning issues of the students rather than just working on political issues like that of Rohit Vemula or Kanhaiya Kumar.

They felt they had not sufficiently worked with the students on the grassroots level.

However they expressed confidence in confronting the Hindua fanatical fascist R.S.S. forces who in their opinion were morally paper tigers.

It felt that unnecessarily forces like A.I.S.F OR A.I.S.A. were intimidated psychological by the R.S.S .vociferously the BCM were critical of the revisionist student organizations who in their view never tapped the revolutionary potential of student community.\

In spite of hardly any organized leadership the Benares Hindu Unversity students launched a major struggle against fee-hike.

A struggle was also launched for a library that would operate day long.

They also stated that great discrimination was displayed towards women in the university with continuous cases of harassment.

Bhagat Singh Chatra Morcha earlier this year launched a 2 day seminar commemorating Lenin's work on Imperialism 100 years ago connecting it with the issue of Brahmanical fascism.

A strong rally of around 200 was led on that Occasion.

In June it launched a Go to Village campaign in the region of Chindoli covering villages for 15 days.

Here they propogated the politics of agrarian revolution particularly to the dalit community and performed cultural programmes.

The students identified with the life of the peasantry.BCM also joined hands with some peasant organizations identifying with the dalit class.

In February 2015 it launched a meeting with peasnt organizations condeming the imperialist policies of govt.Ritesh Vidhyarti felt that there was great potential as 40000 students of Benares university comprised the basic classes ,unlike Jawaharlal University in Delhi.

The BCM today is small and cannot independently organize a major struggle but has made considerable influence in joint fronts even with forces like N.S.U.I.

It is blatantly critical of all ruling class forces but has no objection in working with even rightist party student organization son issues.

The Bhagat Singh Chatra Morcha pledged to uphold the torch of Marxism-Leninism-Maoism and uphold the Maoist led struggle in Dandkaranya.and the legacy of the Andhra Pradesh Radical Students Union.

It also felt that the question of caste had to be deeply studied and integrated with class struggle.It basically felt B.R.Ambedkar was morally a social revolutionary and had many positive points.

They all gave fraternal messages of solidarity in the open session.

During the open session the speakers related how Brahamanical fascism was spreading like wildfire in educational institutions and has to be combated at the very grassroots.The theme was based on students movements of today and how they should be built.They gave examples of the fascist Brahmanical forces were dominating the University campuses.

She praised the unity of left forces during the Rohit Vemula agitation.Jennifer from T.I.S.S.,Mumbai spoke on the gender discrimination in relation to fascism.Professor Pramod Bhagde spoke on how Brahmanical fascism was a phenomenan different from general fascism and how it intervened in every rung and aspect of society.

President Anup concluded the meeting raising the slogan of 'Long live Marxism-Leninism-Maoism'.After the conference a rally was taken out to Lanka garte of B.H.U with activists vehemently shouting slogans against fascist opression of Hindu and Brahminic varieties as well as in support of movement in Dandkaranya.

Significant that the rally was blocked by the police from interspersing the gate of the campus of the benares Hindu University.At the gate the speakers openly condemned the policies of the ruling classes on the student community that diverted them from their burning issues and imposed casteist poison like the fangs of a snake.