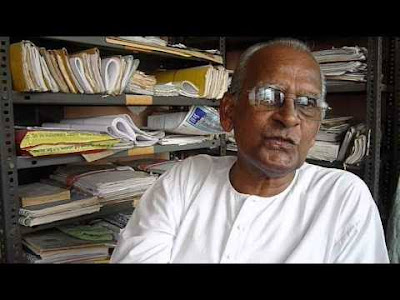 It is sad to note Bojja Tarakam, an advocate by profession and poet, novelist, writer, public speaker, civil libertarian, activist in both revolutionary and Dalit movements and most of all a humane person by choice, breathed his last a few hours ago.

It is a great loss to Telugu society in general and people’s movements in particular. He was born on June 27, 1939 in Kandikuppa village near Amalapuram, East Godavari district.

His father Bojja Appala Swami was a Brahmo Samajist, friend of Babasaheb B R Ambedkar and legislator in Madras and Andhra Pradesh Assemblies (1952-62) and thus Tarakam imbibed the ideas of social reform and social concerns from childhood.

He had his graduation in Kakinada and LLB from Osmania University. For a short while he practiced as a lawyer in Kakinada, but his marriage to Vijaya Bharati, daughter of great Dalit poet Boyi Bheemanna in 1968 brought him to Telangana.

As Vijaya Bharathi garu got a job as a Telugu lecturer in Nizamabad, Tarakam began law practice there and became a part of revolutionary and Dalit movements in the district as well as state. He was founder member of Revolutionary Writers Association (Viplava Rachayitala Sangham – Virasam) and was on its executive committee for many years.

He was arrested in Emergency and spent more than a year in jail. Post-Emergency, Vijaya Bharati joined Telugu Academy in Hyderabad and Tarakam also moved to High Court. During this time his activity was more in civil liberties and Dalit movements.

He fought almost all the cases of Dalit atrocities, like Padirikuppam, Karamchedu, Neerukonda, Chundur, Vempenta, Lakshmipet both in and outside courts. He was instrumental in establishing Andhra Pradesh Dalit Mahasabha after Karamchedu massacre and later became the state president of Republican Party of India.

His most popular primer on the rights of a detained person Poleesulu Arrest Cheste (1981) has seen more than twenty reprints in the last 35 years. He also exposed the atrocities on the SCs and STs as well as the diversion of funds earmarked for the SCs and STs in two popular books in 2012.

He continues to live in his relentless spirit, reverberation of his mesmerizing speeches and insightful books.
Posted by nickglais on 9/19/2016 09:37:00 AM