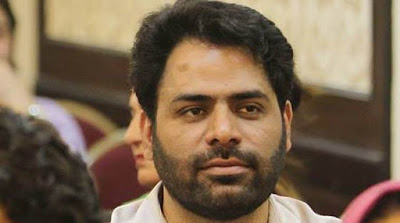 RELEASE KHURRAM PARVEZ IMMEDIATELY AND UNCONDITIONALLY!
RECOGNIZE THE RIGHT TO SELF-DETERMINATION OF THE PEOPLE OF JAMMU & KASHMIR!

WITHDRAW THE ARMY AND PARAMILITARY FROM THE REGION OF JAMMU & KASHMIR!

The Committee for the Release of Political Prisoners condemns the illegal arrest/detention of Kashmiri civil rights activist, Khurram Parvez, who is the chairperson of Asian Federation Against Involuntary Disappearances (AFAD) and Coordinator of Jammu Kashmir Coalition of Civil Societies (JKCCS). Mr. Parvez, who was earlier prevented from boarding a flight to Geneva where he was going to attend the ongoing United Nations Human Rights Commission, was picked up from his residence in Srinagar on Thursday and since then has been transferred to a jail in Kupwara.

Mr. Parvez has been slapped the arrest order under Sections 107 and 151 of the CrPC which pertains to breach of peace and motive to commit a cognizable offence.

The arrest of Khurram Parvez comes in the wake of the killing spree that the Government of India has unleashed in the Kashmir valley since July 2016 following the strongest civil uprising in the valley.

The statement issued by writers, lawyers and intellectuals worldwide demanding the release of Khurram Parvez sums up succinctly the situation in Jammu & Kashmir as it states:


The total disregard for anything pertaining to international law as well as the zero political will to look into the continuing protests of the people demanding their right to self-determination as something to be addressed politically—with due regards to the fundamental rights of the people—have resulted in an ostrich like attitude of Delhi.

This act of self-denial of the Indian State with Narendra Modi government in Delhi have forced it more and more closer to US imperialism which is further escalating the precarious situation in the region.

Possibly it is this fatal attraction to the US that has made the points man of the RSS-BJP for J&K, Ram Madhav to go over the top to demand a complete jaw for a tooth policy to rake up the smokescreen of extraneous forces (read Pakistan) having a hand in the continuing uprising of the people in J&K.

Every now and then the home minister, defence minister and the prime minister maintain that the situation in J&K have come back to ‘normal’. If so then one fails to understand why the need to hand over the entire South Kashmir to the army with sweeping powers!

Thus 70 days have gone since July 2016 with every inch of the region of J&K under curfew. Even on the day of Eid many of the important mosques in the region were not allowed to hold prayers.

Restoring normalcy for the world's largest democracy is to ruthlessly crush the legitimate aspirations of the peoples of Kashmir who are trying to give realization to their inalienable right of self determination while continuously deny them their fundamental rights.

Needless to say that the manner in which the Kashmir issue has been dealt with so far exposes the duplicity of the Indian state, which recognizes self determination only in so far as it applies to peoples under domination in foreign territory, but not to a section of the people demanding the same within the territory of India.

The CRPP demands the unconditional release of Khurram Parvez and calls upon the Government of India to resolve the current crisis in Kashmir politically by recognizing the aspirations of the people of Kashmir.