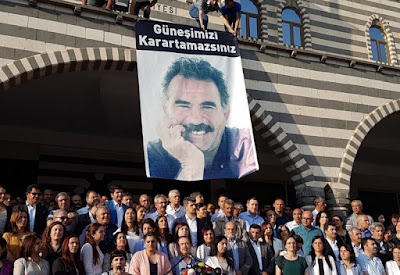 The Council of Europe's European Committee for the Prevention of Torture and Inhuman or Degrading Treatment or Punishment (CPT) has released a statement about its recent visit to Turkey.

However the statement has remained inconclusive as to the situation of Kurdish leader Abdullah Öcalan.

A delegation from the CPT visited Turkey between 29 August and 6 September to examine the treatment and conditions of those detained in connection with the recent coup attempt.

In its statement the CPT also touched on Öcalan's situation saying, "On the occasion of the visit, the delegation also raised with the relevant authorities certain issues related to the situation of Abdullah Öcalan and other prisoners currently held at Imral? F-type High-Security Prison."

However the inconclusive statement, rather than allaying fears, has raised concerns in Kurdish circles. There are fears that Öcalan may have been targeted on 15 July, the day of the coup by putschists, as claims grow stronger that clashes took place on the island between putschist and government forces.

In an email to Kurdishquestion.com the CPT said the purpose of their visit was limited to visiting prisoners imprisoned in connection with the coup attempt. "The CPT did carry out a visit to Imral? in April of this year. The report on that visit was adopted by the Committee in July and we are now awaiting the authorities' response to the report," the response read.

The CPT had previously visited Imral? Prison on 28-29 April 2016, before the coup attempt in July, but did not share information about its findings there. In its statement the CPT had said, "The purpose of the visit was to examine the treatment and conditions of detention of the (four) prisoners currently held in the establishment and to review the measures taken by the Turkish authorities in the light of the recommendations made by the CPT after its previous visit to the prison (in January 2013). In this connection, particular attention was paid to the communal activities offered to the prisoners and the application in practice of their right to receive visits from relatives and lawyers."

The CPT’s report on their latest visit will be transmitted to the Turkish authorities in November 2016. The organisation does not release reports to the public and has refused to share them with Kurdish organisations regarding the situation of Abdullah Öcalan and other Kurdish prisoners.

Kurdish activists have repeatedly held demonstrations at CPT headquarters and accused the organisation of colluding with the Turkish state.

50 politicians and activists began a hunger strike on 5 September demanding permission from the state for a meeting with the Kurdish leader. Öcalan has not had access to his lawyers for more than 5 years and has not met with family members for more than 2.

The last meeting with him was held on 4 April 2015 by the Peoples' Democratic Party (HDP) Imral? delegation during resolution talks.