A BLATANT ACT OF US AGGRESSION AGAINST SYRIA AND SYRIAN PEOPLE, ILPS 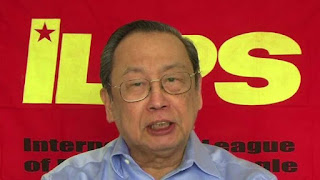 
Statement on the US Air-Strikes in Deir Ezzor, September 19, 2016 from ILPS

The killing of 62 soldier...s of the Syrian Arab Army and the wounding of 100 others from four air strikes carried out by two US F-16 fighter jets and two A-10 support aircraft is a blatant act of aggression and deserves the condemnation of all peace-loving peoples of the world.


It cannot be explained away as an "accident" by the US. This imperialist power boasts of possessing smart bombs that can hit targets with the highest degree of precision. It has refused to coordinate its operations with Russia.

It pursues the neoconservative policy in Washington to destroy any country that refuses to submit to the dictates of US imperialism and assert national sovereignty. It has consistently sought to destroy countries like Iraq, Libya, Syria and Iran for opposing Zionist Israel and the US-Israel combine.

The attack on the Syrian Arab Army positions around Deir Ezzor paved the way for an offensive by Islamic State or Daesh terrorists. These have long been trained, funded and armed by intelligence agencies of the US, Saudi Arabia and Qatar.

The offensive of the US against the Syrian Arab Army was stopped only when Russian fighter jets carried out air strikes against the Daesh terrorists. Since then, Russia has exposed the treacherous act of the US.

The Syrian government called the US air strikes "serious and blatant aggression" and a "conclusive evidence" that the US and its allies are in league with Daesh in a war to overthrow Assad.

Russia has called for an urgent meeting of the United Nations Security Council to demand from the US a detailed explanation for the attacks. Given the sordid record of this UN body, there is nothing much that can be expected in terms of concrete action being taken against the US for its roque behavior.

The attack on Syrian Arab Army forces comes at a time when US plans in Syria appears to be unraveling. A few days ago, US soldiers were driven away from Northern Aleppo by so-called moderate rebels belonging to the Free Syrian Army.

The Free Syrian Army units involved called thw US troops "infidels and crusaders" out to invade Syria. One analyst has wondered whether the attack against the Syrian Arab Army was meant to assure the "moderate rebels" that the US was really their ally against Assad.

Recently, US National Security Adviser Susan Rice was quoted as saying that Syrian rebels might never be strong enough to topple Assad. Does this mean that the US is now ready to wage an overt war against Assad? Is the incident in Deir Ezzor testing the waters?

The International League of Peoples’ Struggle and all peace-loving peoples of the world must condemn the long running US imperialist aggression against Syria and the Syrian people.

The aggressive war instigated by the US has already resulted in hundreds of thousands killed, cities destroyed and millions of refugees displaced and driven out of their country
Posted by nickglais on 9/19/2016 01:25:00 PM