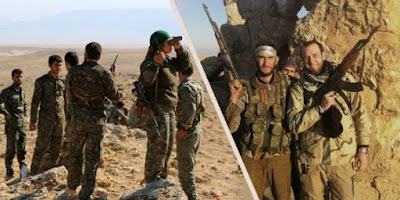 ALEPPO – Syrian Kurdish forces of the People’s Protection Units (YPG) accused Turkey-backed rebels of targeting their positions. The attack reportedly took place on Friday in the village of Merenaz in Afrin District, northwest of Aleppo.

“Supported by Turkey, Syrian opposition factions launched an offensive on our units in the village of Merenaz, in Afrin,” the YPG General Command said.

The YPG said that they were attacked with light and heavy weapons and that they returned fire.

“On Friday morning, the armed opposition factions in Azaz resumed their hostile attacks on our forces stationed in the village of Merenaz, although we are in a position of defence,” the Kurdish leadership said in a statement.

The Turkish Army backed Islamist rebel groups in their push to take the city of Jarablus. The city fell on August 24th. Turkey now intends to stop the Kurdish-led Syrian Democratic Forces (SDF) from connecting the cantons of Afrin and Kobane through al-Bab City in northern Syria.

Tensions have recently increased between Turkey-backed rebels and the SDF soldiers in the region.
Turkish Army Hit Kurdish Positions in Syria

The Turkish Army targeted the YPG’s headquarters near the Syrian border city of Tel Abyad on Thursday.

The YPG’s security headquarters were bombarded by the Turkish artillery near Tel Abyad in the northern countryside of Raqqa Governorate.

Another attack by Turkey’s military targeted a YPG security checkpoint in the town of Munbateh, a Tel Abyad suburb.

“If the international coalition won’t take any action to stop Turkey’s violations on the border, we will respond by force,” the Kurdish officer said.

The YPG and their allies in the SDF, backed by the US-led coalition, expelled the Islamic State militants from Tel Abyad in June 2015.

This is not the first time Turkey has targeted Syrian Kurds. According to military sources, the Turkish Army has earlier launched more than 20 attacks on Kurdish positions in northern Syria. Most of these attacks targeted YPG-held areas in Aleppo, Kobane, and northern Raqqa.