Imprisoned Kurdistan Worker's Party (PKK) leader Abdullah Öcalan has called for a return to peace talks and urged the Turkish state to take a step for the resolution of the Kurdish question. 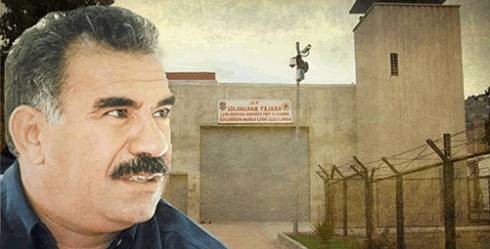 Imprisoned Kurdistan Worker's Party (PKK) leader Abdullah Öcalan has called for a return to peace talks and urged the Turkish state to take a step for the resolution of the Kurdish question.

Mehmet Öcalan said, “We met with the Kurdish people’s leader on Imralı Island yesterday. He sends his greetings and respects to all.”

Brother Öcalan criticised the arbitrary approach to meetings with the PKK leader saying: “Our right to meet with Öcalan has been violated by the state. If this [Turkish] state is run by rule of law, they should have recognised us our legal and democratic right. Before this visit he [Öcalan] hadn't been allowed to see his family for two years and hasn't had access to his lawyers for five years. He can’t exercise his legal rights. Öcalan has great importance for Kurds and the Middle East.”

Mehmet Öcalan also chastised state officials and Turkish media for describing the PKK leader as a 'terrorist'. “He has been struggling for peace, to stop the bloodshed for 23 years. But the press calls him the ‘terrorist leader’. We absolutely reject this language.”

“We didn't end the peace process”

Mehmet Öcalan said his brother's isolation continued but that he was able to meet with the three other inmates on the island prison, all of whom have been imprisoned for PKK membership.

“The isolation continues. I don’t have any physical problems. Our projects [for a solution] are ready. If the state is ready, we can solve the issue within 6 months. We didn't end the solution process. I talked to the [Turkish state] committee that came to visit me, and they said they were going to return in 15 days [April 2015] but didn't. The Kurdish issue isn’t a 40 year issue, it is a 200 year issue. If the state was sincere we could have resolved the matter and this many people wouldn’t have died. I lose sleep over these deaths. This country doesn’t deserve these deaths. If the state is ready, they can send two officials here [for discussions]. The Kurdish issue is a serious matter.

“Our projects are ready. This is a dead-end war, it’s not a war one side can win. It has continued for 40 years, and maybe it will continue for another 80. The blood and tears must stop. A solution can’t be achieved unilaterally. The state is the bigger party, if they point towards a solution, the issue will be resolved. Today is Eid. But it can’t be a celebration if 30 people are dying every day in a country. I celebrate this holiday, but it’s not ethical in this situation. The intellectuals, democrats, political parties and citizens of this country must act immediately for a solution to this issue.”

After Abdullah Öcalan's message was read Democratic Society Congress co-chair Leyla Güven made a statement and brought the hunger strike to an end. Güven said:

“50 Kurdish politicians, intellectuals, writers and artists went on a hunger strike demanding a meeting with Kurdish leader Abdullah Öcalan. The hunger strike's only demand was direct contact with Mr. Öcalan, a committee to visit him to ensure his wellbeing. Yesterday, Mehmet Öcalan met with him. We resisted and won through resistance today as we did in the past. The hunger strike continued for 20 days in Strasbourg and 8 days in Amed (Diyarbakır). I salute those in resistance.

But we always said, hearing from him once doesn’t mean this isolation has ended. As a people we are relieved that he is well. However the struggle will continue so that there is an end to isolation and freedom for Öcalan.
"
Source: ANF
Posted by nickglais on 9/13/2016 12:39:00 PM