The Turkish army on Thursday targeted headquarters of the Kurdish YPG forces near the Syrian border city of Tel Abyad. 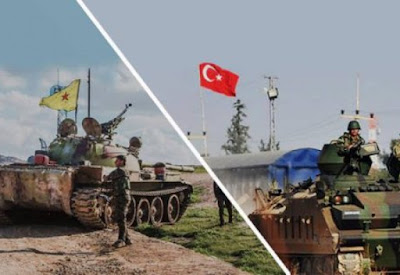 The Turkish army on Thursday targeted headquarters of the Kurdish YPG forces near the Syrian border city of Tel Abyad.

Security headquarters of the People’s Protection Units (YPG) were exposed to artillery bombardment by the Turkish military forces in the vicinity of Tel Abyad in the northern countryside of Raqqa Governorate.

Another attack by Turkey’s military forces targeted a YPG security checkpoint in the town of Munbateh in Tel Abyad suburb.

At least four kurdish fighters were injured by Turkish fire.

“If the international coalition won’t take any action to stop Turkey’s violations on the border, we will respond by force,” the Kurdish official said.

The Kurdish YPG forces and allied factions of the Syrian Democratic Forces (SDF), backed by the US-led coalition, expelled militants of the Islamic State (ISIS) from Tel Abyad in June 2015.

This is not the first time for Turkey to target Syrian Kurds.

The Turkish army has earlier launched more than 20 attacks on Kurdish positions in northern Syria, according to military sources.

Most of the attacks targeted YPG-held areas in Aleppo, Kobane, and northern Raqqa.