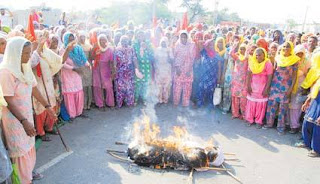 LONG LIVE THE STRUGGLE OF AGRICULTURAL DALIT LABOURERS FROM THE CLUTCHES OF TYRANNY.

MAY THE AGITATION SPREAD LIKE WILDFIRE.GREAT TO ALSO SEE SUCH PARTICIPATION OF WOMEN BURNING EFFIGY OF CHIEF MINISTER ..

SUCH EVENTS ARE A STEPPING STONE FOR A MASSIVE UPSURGE.LIKE A CANDLE LIGHT TURNING INTO A BONFIRE..

TRIBUTE TO METICULOUS GROUNDWORK OF .P.M.K.U. WHO ARE SOWING THE SEEDS FOR MANY A LOTUS TO BLOOM. 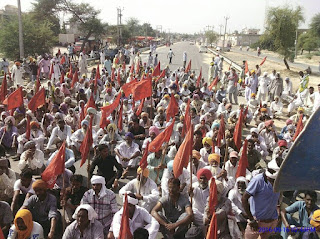 Over a thousand agricultural labourers thronged around Chief minister Prakash Singh Badal's constituency in a protest for demands from 15-17th September..

The main demands was for 5 marlas of land.

The women comrades stole the show burning the effigy of the chief minister.

On the 2nd and 3rd days a heroic jam was launched on the highway.

The town of Lambi looked illuminated with the red flags of .P.M.K.U. activist's who displayed the tenacity of a boulder.

The protest went a long way in ressurecting the demoralized spirit of agricultural dalit labourers in Punjab, labourers assembled from 8 districts.Moral support was also given by activists of the B.K.U-Ekta(Ugrahan) who made a kitchen for the protestors. Punjab Tribune paper reports below.Lambi/Muktsar: Activists of the Punjab Khet Mazdoor Unionon 15th July launched their three-day protest at Lambi village.

They are demanding free five-marla plots for the homeless, compensation against cotton crop failure for farm labourers and financial aid for families of debt-laden farmers who committed suicide.

Lachman Singh Sewewala, general secretary of the union, said, “If the state government did not fulfil our demands, we will intensify our stir.

The CM, on April 1, had assured us that 20,000 plots would be given to farm labourers, but the process has not started yet.”He appealed to the state government to provide permanent employment to the poor and stop thrashing Dalits in the name of cow protection..

On,September 16 Agitating activists of the Punjab Khet Mazdoor Union blocked the Fazilka-Delhi national highway at Lambi village for nearly two hours today. They were demanding free five-marla plots promised to the homeless by the state government.

Senior officers, including Vishesh Sarangal, SDM, Malout, and SP (D) Baljit Singh, had come to meet the protesters. They assured them of a meeting with the CM during his visit to Badal village on September 18, but the protesters did not relent and sought time for the panel meeting to discuss issues in detail.

The protesters said the state government did not allot residential plots to a number of poor families.

Besides, a large number of farm labourers had not yet got compensation against last year’s cotton crop failure. Similarly, a number of genuine people were deprived of the benefit of blue cards.

They also demanded immediate compensation for the families of those who committed suicide due to debt.

Union general secretary Lachman Singh Sewewala said, “We have informed the administration about our demands. If the government does not give us any assurance as regards our demands, we will intensify our protest from tomorrow. Some other unions are also likely to support us.”

On April 1, he said, the CM had assured them that 20,000 plots would be given to farm labourers, but the process had not started yet.

On the final day on 17th July : activists of the Punjab Khet Mazdoor Union burnt an effigy of CM Parkash Singh Badal in Lambi village on the concluding day of their three-day protest on Saturday.

They announced to disrupt the state government’s programmes across the state, even as the district administration assured them that their meeting with the CM had been fixed in Chandigarh on September 20.

The farm labourers’ demands include five-marla plots for the homeless and compensation for last year’s damage to the cotton crop.

The women activists in gathering of around 400 burnt an effigy of the chief minister which was very symbolic.
Posted by nickglais on 9/19/2016 02:18:00 AM