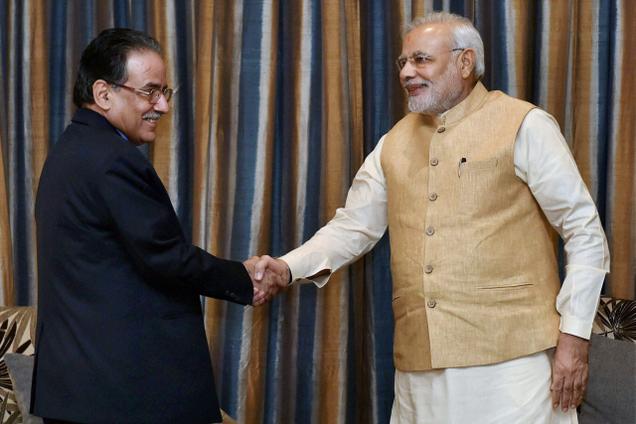 CPN-UML Chairman KP Sharma Oli has accused Prime Minister Pushpa Kamal Dahal of shaming the country by signing a 25-point joint communiqué during his state visit to India. He claimed the agreements were against the national interest.

Inaugurating the party programme in Pokhara on Sunday, the UML chairman said, “The deal has harmed the dignity of Nepali people. He [Dahal] did not come out with a single good work. Whatever he did were against national interest.”

Asserting that India speaking about amending Nepal’s constitution was not a right thing to do, Oli added, “My government was toppled when I denied playing to the tunes of ‘others’”. He also claimed that conspiracy was hatched to obstruct promulgation of the constitution.

Speaking at the programme, UML General Secretary Ishwar Pokharel said the government was plotting to ditch the constitution by not holding elections. “Constitution will not be amended under any circumstances,” he said.

CPN (Revolutionary Maoist) Chairman Mohan Baidya has claimed that the joint statement signed by the prime ministers of Nepal and India is against Nepal and the Nepali people.

In a statement, Baidya, a former deputy of Prime Minister Pushpa Kamal Dahal, criticised the PM for reviving the Pancheshwar Hydropower Project, supporting BIPPA (Bilateral Investment Promotion and Protection Agreement) with India and giving continuation to unequal pacts including the Peace and Friendship Treaty of 1950.

“The joint statement also clarifies that the prime minister had gone to seek India’s support for different issues including constitution amendment but had failed,” Baidya charged.

In a similar tone, CPN Maoist chief Netra Bikram Chand slammed Dahal’s agreement with India, warning of protests against it. He commented that PM Dahal had surrendered to India.