Day of victory, how far it was from us all,
Like in extinct campfire burns out the coal.

There were miles, burned, in dust and soot-
To bring this day as near, as we could.

This Day of Victory

Of gunpowder smell it comprise,
This Celebration
With a grey hair on it's sides.

This elation
With the tears in the eyes.

Near Martin furnaces days and nights
Our Country didn't shut it's eyes.

Days and nights we fought hard and we stood-
To bring this day as near as we could.

This day of Victory...

Hello, Mama, I'm back, but not all of us...
If only we could bare foot run through the wet grass!

Half of Europe we marched, half of all the Land-
To bring this day as close as we can.

The song refers to the Victory Day (9 May) celebration and differs from most of these by its cheerful intonations of a marching song and by the fact that it was composed some thirty years after the war.

In the words of Vladimir Shainsky, a veteran composer, "the song seemed to have turned back the time. Although written three decades after the war, it now seems that it was this song that helped us to gain the victory".

Victory Day[a 1] or 9 May marks the capitulation of Nazi Germany to the Soviet Union in the Second World War (also known as the Great Patriotic War in the Soviet Union). It was first inaugurated in the fifteen republics of the Soviet Union, following the signing of the surrender document late in the evening on 8 May 1945 (after midnight, thus on 9 May, by Moscow Time).

The Soviet government announced the victory early on 9 May after the signing ceremony in Berlin.[1] Though the official inauguration happened in 1945 (which means it has been celebrated since 1946), the holiday became a non-labour day only in 1965 and only in some of the countries. 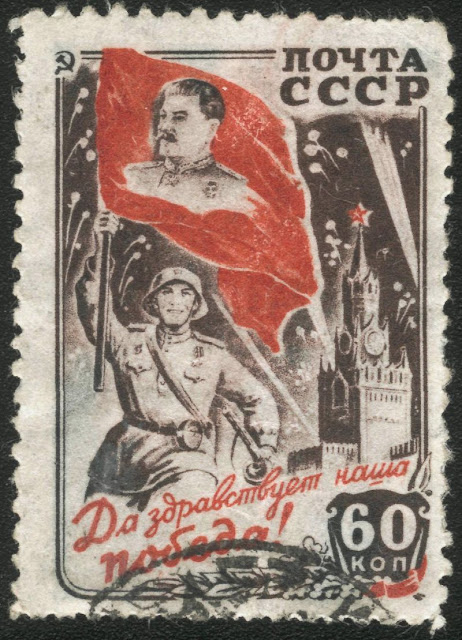 Soviet stamp, 1945. The inscription on the bottom written in cursive, below the Soviet soldier waving the red flag with Joseph Stalin on it, says, "Long live our victory!"