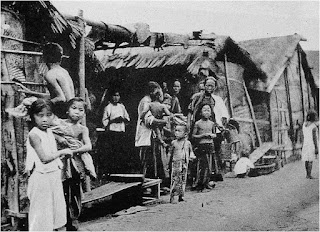 Famines are a hallmark of economic backwardness. It bears remembering that China on the eve of the Great Leap Forward was one of the poorest places on earth, if not the poorest.

According to the late Angus Maddison’s reconstructions, Chinese real GDP per head in 1957 was only one quarter of the global average in the 1950s and one-twelfth of today’s global average.

Despite having been (by Maddison’s reckoning) the 12th fastest growing economy on the globe since 1950, China in 1957 was still ranked 120th out of the 140 economies included.

Alternatively, only ten of the same 140 economies were poorer in 1970 (and only eight in 1980) than China had been on the eve of the Great Leap Forward. The Penn World Tables (Heston et al.
2009) paint much gloomier picture of the Chinese economy in this period.

Their coverage is much narrower for the 1950s, and their earliest data for China refer to 1952. In each year between 1952 and 1957, the Penn World Tables reveal China’s GDP per head as the lowest in the world.

They imply that Chinese GDP per head in 1957 was 3.9 per cent that of the USA; by Maddison’s reckoning the ratio was 5.8 per cent. Low GDP per head was compounded by very unequal land and income distributions , low life expectancy, and high infant mortality.

For at least a century before 1949, major famines were probably frequent enough to warrant Walter Mallory’s depiction of China in 1926 as the ‘land of famine’. The Taiping Rebellion is routinely reported as costing twenty million, mostly from famine and disease.

Neither R. H. Tawney’s report that the famine of 1849 ‘is said to have destroyed 13,750,000 persons’ nor contemporary claims that the Great North China Famine of 1876–9 took a further 9.5 million to 13 million should be taken literally, but such estimates accurately underline the apocalyptic nature of those famines.

Famine mortality probably declined thereafter. Yet Yang (2010) claims that China’s most severe famine before the GLF famine occurred in 1928-30, killing ten million people. Between 1920 and 1936, he added, ‘famine due to crop failures took the lives of 18.36 million people’. Again, these numbers seem too high.

Still, Tawney witnessed the devastation that followed in the wake of the famines of the late 1920s, and famine in Anhui province in 1929 inspired Nobel laureate Pearl Buck’s The Good Earth.

Nor did it end there. Famine in the Yellow River region in 1935 resulted in significant female infanticide in 1935–6, while the Henan famine of 1942 produced its own catalogue of atrocities.

It also bears noting that the impact of the famine was greatest in China’s poorest regions, and in those regions where harvest shortfalls were greatest in 1959-61. Proxies for the harvest and regional income alone explain about half the variation in excess mortality during the GLF (Ó Gráda 2008).2

Had Dikötter focused more on the implications of northern China’s ‘dry and dusty countryside [and] an alkaline soil that hardly yielded enough grain for villagers to survive on’ (p. 46) he might have produced a more rounded account of the tragedy. This, it hardly bears stressing, is not to deny the role of human agency, however, since the harvest shortfall, if not the poverty, was endogenous to policy.
.
China’s extreme backwardness on the eve of the Leap matters because it greatly increased its vulnerability to disequilibria, man-made or other. Had Chinese GDP per head been, say, twice as high as it was, the devastation wreaked by the Leap would presumably have been much less.

Nor, on the other hand, does Mao's Great Famine take sufficient account of how conditions improved between 1949 and 1958. If the standard estimate of grain output of 200 million metric tons in 1958 is taken at face value (p. 132), then there was enough food to provide an average daily intake of about 2,170 kcals (Ashton et al. 1984:

622; compare Meng et al. 2010). If, however, the output data are contaminated by Leap-style ‘winds of exaggeration’ and refer to unhusked grain, then the picture is much less rosy, and the margin for error by central planners much narrower. Nonetheless, the achievements of the pre-Leap years prompted a false optimism that much faster growth was feasible—catching up
or overtaking Britain ‘in fifteen years’ (pp. 14, 15, 73).